As seen in the video above, TMZ Sports spoke with RAW Women’s Champion Becky Lynch at the WrestleMania 37 press conference in Inglewood, CA on Tuesday.

The Man was asked about WWE signing the daughter of The Rock, 18 year old Simone Johnson. Simone has reported to the WWE Performance Center in Orlando to begin training under her WWE NXT deal as WWE’s first fourth generation Superstar. Lynch was asked what advice she would give Simone.

“Work hard,” Lynch said. “Work as hard as you possibly can. Work harder than everybody else. The thing is, there’s going to be a lot of pressure on her. There’s big shoes to fill. She’s going to feel that, she’s going to know that everybody expects a lot more from her, and that she’s going to be under a lot more criticism than everybody else. She doesn’t get that chance, that slack-line, that other people might get. But I think she’s up for the challenge and I think that really tests you, that makes you into the woman that you want to be, and to be a champion, and whenever she’s ready I’ll be holding down the fort.”

Lynch joked again about being ready to face Simone some day. “Ill still be holding onto this whenever she’s ready, in 5 years from here,” Lynch said, laughing and patting her title.

Lynch was then asked if Simone should use her dad’s signature move, The People’s Elbow.

“You know what, no,” Becky said in response. “I think maybe there will be a chance for it, but I think it’ll be good for her to try and make her own way. Don’t rely on the past, don’t rely on what got other people over. Try to make something new for yourself. I think there’s merit in that. I would like her to be seen as the athlete and performer that she is on her own right, and not have her constantly compared to her dad.” 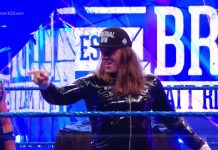