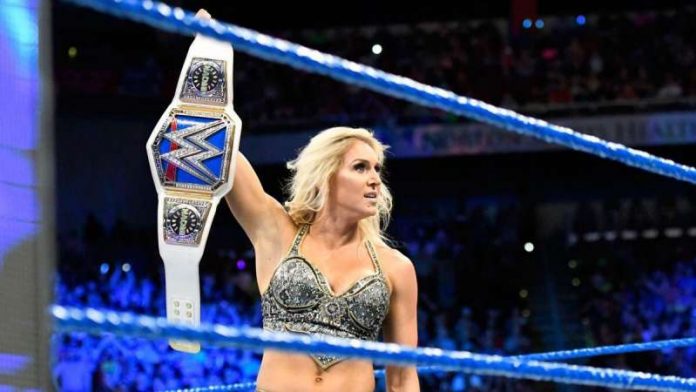 The Flair – Lynch issues were also referenced by Pat McAfee on commentary.

As we’ve noted, the October 22 edition of SmackDown saw Flair and Lynch participate in a championship exchange segment, moderated by Sonya Deville, where they switched titles due to the WWE Draft. Tension between the two reportedly led to an off-script moment in the segment, which caused a backstage confrontation between Flair and Lynch.

In an update, Flair came to the ring for an in-ring promo during Friday’s SmackDown episode and that’s where McAfee first referenced the issues with Lynch, when plugging their non-title champion vs. champion match at the upcoming WWE Survivor Series pay-per-view. McAfee noted how things were heated the last time Flair and Lynch were in the ring together. Flair made her entrance to the ring, and SmackDown went to commercial.

SmackDown then returned from the break and Flair wondered who Becky really is after talking about how she has had various nicknames since joining WWE – The Irish Lass Kicker, The Man, Becky 2 Belts, Big Time Becks and now the new nickname Flair has given her – Becky Uh-Oh for “Charlotte Beat Me Uh-Oh, Charlotte Is Superior Uh-Oh, I Came Back From Having A Baby Too Soon Uh-Oh, Charlotte’s Going To Beat Me Up Uh-Oh.”

Flair went on and stated how there’s nothing natural about Becky as she’s just a fabricated champion, from her catchphrases to her orange hair and who knows what else. Flair also took credit for Becky’s big double title win at WrestleMania 35.

Lynch took to Twitter during SmackDown and responded to Flair’s comments.

“Hahahaha. Did Charlotte just say there’s nothing natural about ME?! That’s brilliant,” she wrote.

Flair has not responded to Lynch’s tweet as of this writing.

Before Friday’s SmackDown segment with Flair went down, it was reported by WrestlingNews.co how there had been some talk within the WWE creative team about how the real issues between Flair and Lynch were possibly going to be used in the storylines to generate more buzz for their Survivor Series match. It looks like this will continue as we get closer to the November 21 pay-per-view.

The SmackDown segment with Flair was interrupted by Toni Storm for a brief showdown between the two. Storm challenged Flair to a title match right there, but Flair denied the challenge. Storm appeared in a post-show segment, seen below, where she vowed to prove she’s ready to challenge Flair.

For those who missed it, Lynch also discussed the backstage incident with Flair and their current relationship during a SI Media Podcast interview with Jimmy Traina earlier this week. You can click here for those comments from Lynch.

Hahahaha. Did Charlotte just say there’s nothing natural about ME?! That’s brilliant. https://t.co/TpFrHEvJwi