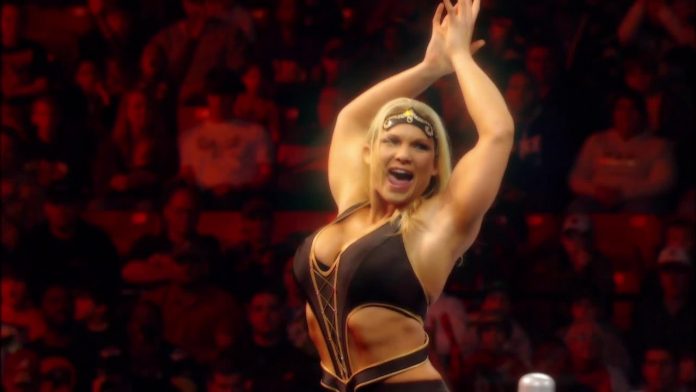 On why she left the WWE: “I was really frustrated with where the women were at from a company standpoint, and the investment that was being made in us. I felt in my heart I had done my best, and I’d try really hard to change things but, at some point I just got really frustrated. Also, all the travel. I had been away from my family for a long time. We buried both my grandparents, my uncle passed away from cancer; I missed so many milestones in my families lives, that I just thought it was time to come home and be with them for a little bit and take a break from the road. And in that time, Adam’s career as an actor was taking off, and I had just had the baby. I just took that supportive role at home, and I loved it. I loved being a stay-at-Home mom. I followed wrestling, but I had just kind of made peace with, like, ‘OK, that was my career. I’m now a mom, and I’m going to find other things to do with my life’.”

On being a commentator with NXT: “It’s been one of those things where I’ve had to just kind of commit myself, and give myself up to the process, and just try. I fail all the time, and I’m always making mistakes, but we learn each and every week, and I’m learning to find my voice, and my place in the team, because, being a color commentator, adding that analyst role, is really different than being play-by-play. They’re two completely different animals. Driving traffic as a play-by-play guy, that is a big responsibility and a lot of work, and, as an analyst, my job is to take some of the burden off the play-by-play announcer, and try to add a little bit of credibility from somebody that has experience in what is going on in the ring. It was definitely not something I would have ever thought I would do. If you told me 5 years ago I was going to be sitting alongside Mauro [Ranallo] and Nigel McGuiness in NXT, I would have laughed at you. Here I find myself, and I’m just giving it my best.”

On trying out for Tough Enough: “I had an opportunity to work for the US Department of Probation in Buffalo. I had a great job lined up, and I kind of came to this crossroads. I had entered a tape into Tough Enough III, and I kept making it through the rounds, I kept making the cut. I kept thinking to myself ‘I’m working this job 40 hours a week with this career I could have for the rest of my life with a great paying job, a federal job.’ Meanwhile, I start making the cut in my side job of being a wrestler, and then I finally made it to the Top 25. MTV called me and said ‘We’d like you to come all the way to Hollywood, and come to be on our show’ and I was like ‘oh my god’. I went to my boss….. and I said ‘Listen, I have this opportunity, it’s kind of a once in a lifetime thing. Can I have a couple days off to go out there?’ and my boss said no. He said ‘you haven’t accrued the time, and if you do take the time, not only do we have to fire you, but we can’t give you a good recommendation.’ I was like ‘oh snap! okay!’ I had this crossroads where I had to choose “Do I keep going on this real life job, or do I forego everything and drown myself in student debt and just go off basically as a starving artist and try this Tough Enough thing?’ I chose to go to Hollywood.”

On Chyna’s influence and entry in 2010 Royal Rumble: “There are so many moments in my career that were meaningful to me personally, but I felt like, Chyna was such a huge influence on me, and being that mold-breaking female, that was just like nothing I’d ever seen before, and such an inspiration to get into the gym. Getting that opportunity to walk in the road she paved for me, I was on cloud nine.

I’ll never forget, I sprinted to the ring for my moment, when my number hit, and then after I was eliminated and went to the back, I ran into The Undertaker, and he said ‘You might have broke a world record with that sprint’. We had a little chuckle because it wasn’t on purpose, I wasn’t trying to get to the ring fast, I was just so amped up, my head could explode. It was one of those surreal moments, and you could have blinked and missed it. For me, it was such a vindication for everything I had wanted to do, to be recognized, not as ‘she’s good, for a girl…. she’s a good wrestler as a girl’. I wanted it to be ‘You’re a good wrestler. You were great at what you did.’ For me, that was like winning the Olympics.”

Listen to “Beth Phoenix” on Spreaker.

WWE PWMania.com Staff - 01/23/2020
In an interview with WWE, Kacy Catanzaro talked about her hiatus from the company. Here are some quotes from her interview: “Being away the last...