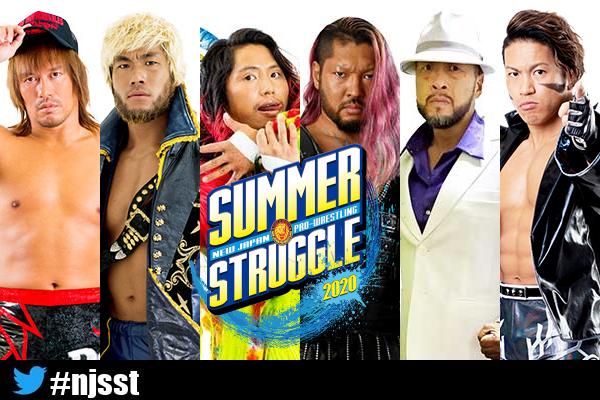 Watch Summer Struggle live and on demand with NJPW World!

At a special press conference in Tokyo today, two major title matches were made for August 29 and Summer Struggle in Jingu.

EVIL will defend the IWGP Intercontinental and Heavyweight Championships against Tetsuya Naito in Jingu Stadium. Naito had declared that revenge for EVIL’s victory at Dominion in Osaka Jo Hall would be top priority in the Summer Struggle tour, and after EVIL retained his championships at Sengoku Lord in Nagoya on July 25, he was quick to challenge the King of Darkness, declaring that the ‘rental period on (those belts) is over’. Though Tetsuya Naito became the first double IWGP Champion on January 5 at Wrestle Kingdom, the global pandemic, Naito would state ‘denied me the chance to show all of Japan what the first IWGP Intercontinental and Heavyweight Champion looked like’, and motivation is high for El Ingobernable to retake his twin crowns.

That motivation was plain to see in his aggressive performances this weekend at Korakuen Hall, but in both cases EVIL and BULLET CLUB had the upper hand by the end of the evening. Can Naito overcome a stacked deck to make history again?

Also confirmed for Summer Struggle in Jingu is Hiromu Takahashi defending the IWGP Junior Heavyweight Championship against Taiji Ishimori. After Takahashi suffered defeat at the hands of EVIL at Sengoku Lord, Ishimori ran to the ring to deliver a brutal exclamation point with Bloody Cross. Another Bloody Cross followed after the main event in Korakuen Hall on July 26, along with it a challenge to the Junior Heavyweight Champion which Hiromu accepted.

The next night in Korakuen however, damage accrued after three nights of action severely hampered Takahashi, who was badly affected by shoulder issues, leading eventually to a submission loss to Ishimori’s Yes Lock. Can the Time Bomb recover in time for Jingu, and the assault of the Bone Soldier?

Much more is still to be announced for the biggest event of the summer in the sacred sporting ground of Jingu!