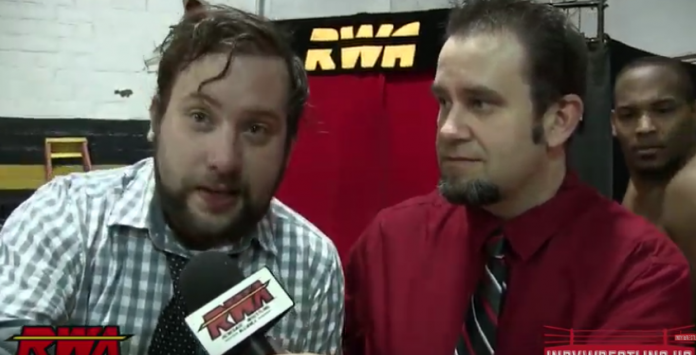 For years, the podcast market of professional wrestling content has catered to the dirt of the industry, the notion that the sports entertainment business is often a shark tank, which it definitely is. Money comes first and second then acquaintances and somewhere below that on the list might be friends. Granted, business is business, but whether it’s high-priced negotiations on a national level or a promoter of some alphabet soup indy in the middle of Iowa that wants to save $10, friendships are usually secondary to ego in the industry.

Someone clutching to “their spot” leads to deception and bitterness.

Thankfully, that’s not always the case and there are examples of when friendships, both at the highest levels and the local market, can play a role in a much nicer narrative of the sport that so many have a passion for.

“I found wrestling the same way everyone in the late-90s found it, Stone Cold, The Rock, and NWO were all everyone talked about. My parents hated it. Absolutely refused to let us watch it, and so I’d have to sneak to watch it at a friends house, who’d kindly record Raw and pay-per-views on a VHS tape because he was a WWF guy. During that time, I got enthralled in the storytelling, so Wrestlemania 17 was like the peak for me because every match pretty much had a six week build,” said Tony Kincaid, a villainous announcer of the Western Pennsylvania scene.

His low-key fandom of the sport continued through the years and by the time VHS was an antiquated form of media, he was a full-fledged consumer of as much content as he could find on television. But, familiarity breeds contempt and his diehard fandom grew tired of the mainstream narratives of the genre in the United States so he looked for more of a variety with his wrestling, a decision that would have a major impact later on.

“Eventually, I started to hate mainstream wrestling for not being inventive enough in their stories. The wrestlers athletically are the best they’ve ever been, but the stories just lack reasoning to boo and cheer. So, I was drifting away from wrestling and watching more NJPW and indy stuff when I could find it online. I would also go back to old 1980s feuds and watch those,” Tony explained.

His exposure to the concept of independent wrestling, a format that allows performers to go outside of the strict parameters of television, opened the door to an aspect of the sport that reignited his passion. A sports fan all of his life, Kincaid has competed in deck hockey for the better part of a decade, with his teams in tournaments at spots all along the east coast over the years. Through his time on the team, he met one of his best friends, a pal that he shared a love of the rink and the ring with, Mike “Doc” Daughtery, one of the premiere commentators in the Pittsburgh area.

“For like a year he kept telling me to come down to Renegade Wrestling Alliance in West Newton and check it out, but I kept not wanting to. Eventually, RWA’s original color commentator Church had to take a year or so off and Doc got me in. So, my first show was November of 2018 in West Newton, which in hindsight is literally being forged in fire. RWA made Tony Kincaid the quick-witted jerk who will cuss out a child just by being themselves, God bless them,” Tony remarked.

“Tony was always a cool guy when we played each other. We ended up on the same team during our beginning years and started talking more and more. I invited him to my team and we became closet friends, basically brothers. He knew so much about wrestling and showed such a passion for it. I asked him to come down and give it a shot. I’m glad I did because he did pretty good for his first time. It was magic ever since then. On the mic, he sounds like he hates my guts and is the heel commentary anybody would want in their booth,” Doc added.

“That’s the beauty of the whole thing. Doc is the best at being the moral compass of a company’s booth and I feed off of that to be the best heel possible. It’s very Gorilla and Brain,” Tony commented.

The Renegade Wrestling Alliance, a blue-collar league that was founded based on a pure passion for the sport, became a staple of the Pittsburgh scene more than ten years ago, garnering a very dedicated fan base that rallies the heroes to victory and greets the villains with jeers during month events at the West Newton venue.

Kincaid, who was so enthused with the old school aspects of the business as a fan, found a home there with his own antagonistic persona to compliment his broadcast partner’s stellar skill set.

“Essentially, I consider the commentary booth to be the same as the muses of Greek theatre. They move the story along in a free flow with the action in the ring and also push the narrative in the direction the program wants to go. I’ll give an example. Say someone is turning, but they are a fan favorite so the crowd doesn’t really gel with the turn live. As commentators. our job is to influence our audience on rewatch or on post-show social media to be as confused as we are by the actions, so by next month they’ve come to terms that this turn was wrong and those cheers are turning more to boos,” Kincaid explained

“We have to essentially play it live when recording, so we have to react and follow along with the ring work while also getting the story-beats down. In addition, we have to make sure that the little things that a live audience may miss are amplified on the recording,” he continued.

Tony’s efforts over the past three and a half years were noticed and rewarded when he was offered a spot alongside Daughtery at Prospect Pro Wrestling, another league that focuses on the development of the next generation of stars, as well. The two best friends made quite the formidable team at the desk. Despite his villainous take on the mic, the passion that Kincaid has for the industry shines through with his efforts.

“I’ll say this, if you don’t know Tony outside the Kincaid persona, you’re missing out. I thank God I met him, he is honestly one the greatest people I’ve ever known,” Daughtery.

The nature of professional wrestling doesn’t usually lend itself to strong friendships, but it’s certainly good when it does.

“I love being considered a top color guy in the Pittsburgh area. I love the guys in the locker room and the connections I’ve made. I love that I’ve gotten to call matches featuring future national guys like Lee Moriarty and Cole Karter. I think there are a few guys I see every month who will also reach the top someday. If the opportunity comes to manage, I’d love to take a dip in that. But for now, I love working shows with Doc. I love being hated. Things are pretty great,” Kincaid concluded.