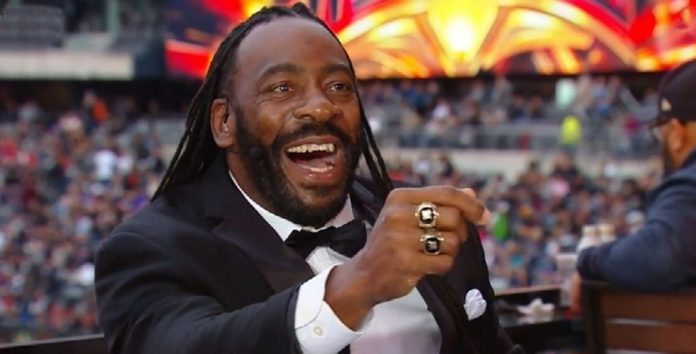 During the discussion, Booker T spoke about his work on NXT and how he keeps the fans entertained:

“I think having fun is very important,” Booker said. “Getting that weekly dose, sitting at that table watching those young guys go out there and perform at a very high level, and then to add my form of commentary is pretty cool because I’m not a traditional commentator or anything like that. I don’t claim to be like Michael Cole. I can’t do that, but I can entertain you. I can make you go, ‘Man, this is fun’, as well as I can be very educational, and I can really make the match feel like it’s something really, really going on at the same time. I think that’s what wrestling is. Wrestling is not like boxing. It’s not like MMA. Those sports are brutal. Wrestling is a relief.”

Booker T stated that he only saw wrestling as a job:

“Wrestling for me has always just been a job. That’s the only thing it’s ever been. I’ve never looked at wrestling as anything other than it’s my job. The championship, like just say the belt, championship, you know, like I got on my wall back here, I never really cared about that. What I cared about was the title. You know that title being, you know, the world champion, you know, you’re the guy that’s carrying the company. You’re the guy that we’re giving the ball to. We’re believing in you to pull the load because when you’re the champ, when you got the title, you’re doing the outside work as well as inside work. You’re the champion in the ring, out of the ring, all the time. It’s a hell of a job. So for me, that responsibility, I think I looked forward to more than anything.”