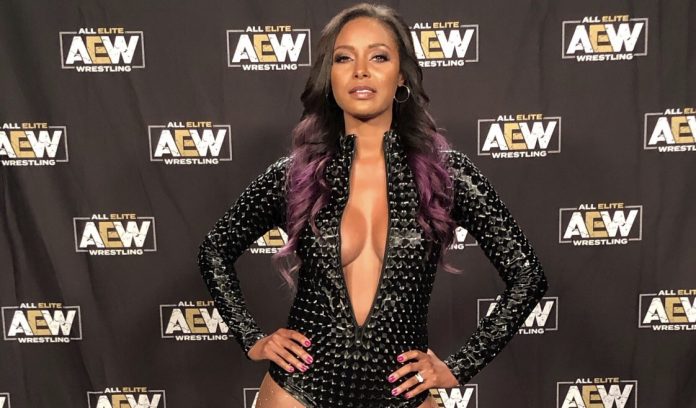 Brandi Rhodes is trending on Twitter for her promo during Wednesday’s New Year’s Smash edition of AEW Dynamite, which included a mention of WWE’s Paul Heyman.

Dynamite featured an in-ring segment with Dan Lambert, Ethan Page and Scorpio Sky, where Lambert ripped on Arn Anderson and TNT Champion Cody Rhodes. Lambert said Arn used to be a Horseman, but now he’s just a whore, and that is a perfect segue to Brandi. Page then mocked Brandi for being a so-called wrestler. Lambert went on ripping Cody for his neck tattoo and how he never made it until he cut a backstage deal with AEW President Tony Khan. He also said AEW fans might be idiots, but they don’t like the “shit sandwich” Cody is shoving down their throats.

Brandi then interrupted the segment and delivered a heated promo of her own. She referred to the American Top Team boss as a “bobblehead, ugly ass, less talented version of Paul Heyman.” Lambert responded and said he prefers Jim Cornette. Brandi offered to beat Lambert up, and at one point said if Lambert is a black belt, then she’s “a black bitch,” as a way to challenge him to a fight. The back & forth continued until Dustin Rhodes came out to calm things down. Dustin was then attacked by Sky and laid out as they left to the back, taunting the crowd on the way.

The feud will continue during this Friday’s New Year’s Smash edition of AEW Rampage on TNT when Cody defends the TNT Title against Page.

Heyman has not publicly reacted to the name-drop as of this writing.

This woman is all of us #AEWDynamite pic.twitter.com/sfzycAHoAQ

.@OfficialEGO with what will be the next Tik Tok trend #AEWDynamite pic.twitter.com/UPQbQCcinN