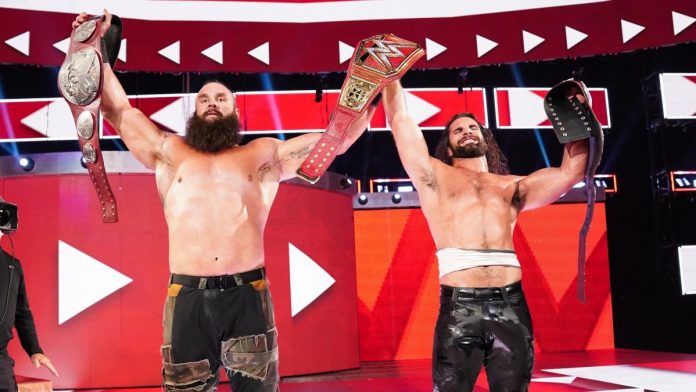 Braun Strowman walked into Raw Monday night thinking he’d have a shot at becoming United States Champion. But by the end of the night, “The Monster Among Men” became one-half of the Raw Tag Team Champions with Seth Rollins.

Earlier in the show, Strowman beat United States Champion AJ Styles via disqualification due to interference from Luke Gallows and Karl Anderson. Rollins, who Strowman saved the week before from an attack by The O.C., ran down and chased away Styles, Gallows and Anderson to make the save.

Rollins then approached Strowman backstage and asked him if he wanted to team up to challenge Gallows and Anderson for the Raw Tag Team Championship. Strowman accepted Rollins’ request, setting up the match.

Gallows and Anderson had the advantage thanks to constant interference from Styles. But Strowman and Rollins managed to score the win when Strowman hit Anderson with a Running Powerslam. Styles tried to interfere, but Rollins cut him off with the Stomp as he tried to slide into the ring.

That's a LOT of gold!

Did they do it? YES, THEY DID.

Following the match, Strowman and Rollins stood on the ramp with their respective titles raised. However, just before Raw went off the air, Rollins noticed Strowman staring at his Universal Championship.

That's a LOT of gold!