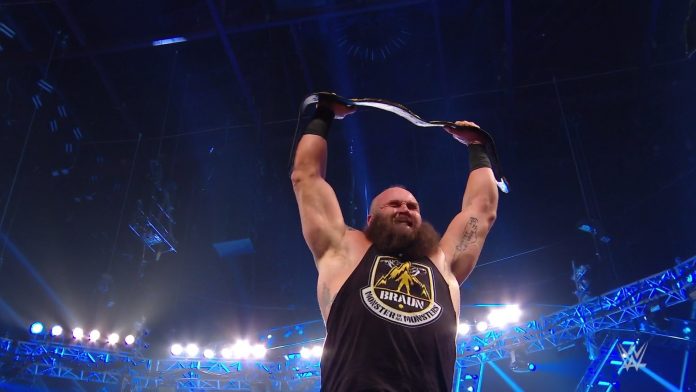 Above is post-show footage of Strowman’s first championship photo shoot and below is post-show video of Cathy Kelley interviewing The Monster Among Men. He talked about the feud with Nakamura, Sami Zayn and Cesaro.

“Ever since I started this with Shinsuke, it’s been an uphill battle with basically fighting three other athletes with Sami Zayn and Cesaro being at his side throughout this whole thing,” Strowman said. “And you know, their tactics have worked a few times to keep me from coming up with the big W and getting this Intercontinental Championship, but tonight their plan backfired in their face. I hit Shinsuke Nakamura in the middle of the ring with the running powerslam, 1-2-3. Here I am, standing the new Intercontinental Champion.”

Cathy also asked Strowman about getting emotional after the big title win. Strowman said he’s been chasing the title shot opportunity for more than 4 years, and this win is a huge milestone for him.

“You know, it was,” Strowman said. “I’m still very emotional. This is a hard thing for me to take all in, seeing as this is my first singles title that I’ve had as a WWE Superstar. I mean, this is a huge milestone for me. For 4.5 years I’ve been chasing this opportunity and finally tonight I got my hands on the Intercontinental Championship, and I don’t plan on letting go of this thing anytime soon.”

Cathy commented on Strowman being eager to get his custom title plates on, and Braun made it known that he’s taking challengers.

“Let’s get these Monster Among [Men] nameplates on here, and let’s roll with this thing,” Strowman said. “I’m taking challengers, who wants to get these hands?”