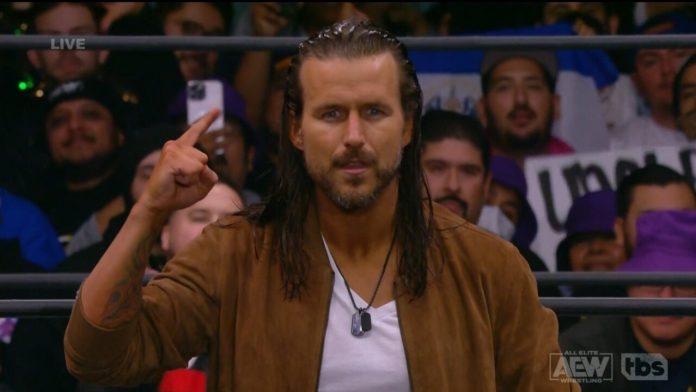 Only two weeks into the new year and AEW are running very well with another great show this week. The best of seven came to an end in an incredible way and some great matches outside of the trios match too. A huge return to talk about as well.

Starting off the show hot with a grudge match that has had a pretty good build. Hangman came down to the ring in a serious manner, which was great, and it’s great to see him back in the ring. The match immediately descended into a fight, Mox took control. After the break Hangman hit a moonsault on Moxley to the outside. Moxley hit a death rider for a great nearfall, Hangman’s desire to keep going helped his babyface fire and come to the end and Hangman hit his buck shot lariat for the win. A rare loss for Moxley, who loses very rarely, post match Mox was being checked on by ringside doctors.

Either this leads to another match a few weeks down the line, or it just writes Mox off TV for a little bit. Hangman did have a look of concern when looking on, so maybe there’s more to this story and we get one more match out of this.

Just before this, Tony Schiavone was in the ring to introduce the next guest, and based on how it was framed it a bit of a subversion of expectations, because it was already announced we’d hear from MJF. So it seemed like he would be introducing MJF, but out came Adam Cole to a fantastic reaction, it was a great surprise, as the last time we seen him was when he and ReDragon attacked The Young Bucks.

He said he had good news and bad news, good news was he missed AEW and wrestling and told his story of the last six months, which was emotional for him. But the bad news, the bad news was for the locker room because Adam Cole is officially back.

Some of the best news coming out of this show, I’m glad he is back, and it just gives another main event caliber talent to showcase. Also, during the promo, Cole was all babyface, didn’t make a heel remark like I thought he might eventually, so it looks like we’re going forward with Adam Cole as a babyface, unless we see differently in the next couple of weeks. But all in all very excited to see what he’s going to be doing going forward.

This was a fun match with what I’m assuming will be a one time thing for this match only. Throughout the past few weeks it has been teased that Hook will T-bone suplex Big Bill, but he just hasn’t got it done. However, this was the match and the time that it happened. Hook managed to suplex Big Bill and it got a great reaction, and this led to Junglehook picking up the win. In essence it was fairly standard, but was fun.

I think Jungle Boy and Hook go their separate ways and it would be good if they were both on TV going forward. Hook I could see continuing his great run. As far as Jungle Boy, it’s hard, because it’s basically him just waiting for Christian Cage to get back so they can do the match that was planned last year, but you could have him go after the TNT title or All Atlantic title, it’ll be interesting to see his direction.

With Takeshita signed officially to AEW not so long ago, of course we get Danielson vs Takeshita. What a fantastic match, it was hard hitting, had great wrestling, and once again, Takeshita showed himself as a future world champion with his performance. The crowd got into it as well, it feels like every time he gets into a match, the crowd gets into it, it is a sign that he is absolutely phenomenal.

Bryan had to win this match, per the agreement made by him and MJF last week. Pre-match, MJF came out and insulted Takeshita, the crowd, the city and the celebrities that were there, so that was wonderful. Danielson did indeed win the match, with the Regal Stretch. So he’s won one match so far, he’ll have to win some more over next few weeks in order to get the Iron man match with MJF at Revolution. But it should be good because with Bryan, almost all of the time, he will always have a good match.

The main story that ran through this match, was Shida, because last week when Saraya announced that Toni Storm will partner with her, Shida seemed fairly offended by that, especially because it happened right in front of her. It was solid match for what it was, and Jamie Hayter is still super over which is great. It seems the breakup of Baker and Hayter is on hold for now.

But during the match Shida came down to ringside, in the corner of Saraya and Storm. However as the match drew to a close, the referee was distracted, which led to Shida throwing her kendo stick into the ring. This is where we were told it was supposed to help out the babyfaces, but instead Britt Baker picked it up and hit Storm with it, which enabled Hayter to get the win. Then the camera panned to Shida who looked shocked at the outcome.

Now I can’t help but feel this is leading to Shida’s heel turn, stemming from last week obviously. But it could be a case of Shida joining with Baker and Hayter, so I’m very curious as to how this will play out. I think regardless of what happens, Shida will be turning heel, how she does it will be interesting thing. Now I could be wrong but this is seemingly where it’s headed.

So the JAS come out and essentially rip on Starks and Andretti, this cues Starks and Andretti to come out. Basically it was a set up for the match that was actually announced in the previous segment between Ricky Starks and Jake Hager. This segment was probably the weakest of the show, Andretti got some mic time, which turned out okay, but he’s consistently on TV since he beat Jericho which is great. However, the segment could have easily but cut down a bit, but this Starks v Jericho feud looks to be continuing along which might end up going through on to Revolution.

The Elite vs Death Triangle – Match #7

Finally we reached the end of the best of seven series. It was a rather fitting ending to the series, it was crazy, fast-paced, spot fest really. Kenny Omega crashed through a table missing a dive over the top rope, Nick Jackson hit a 450 splash onto Penta through a table on the outside. Penta hit a fear factor on a ladder bridge between the ladder and the ropes. Nick Jackson landed hamstrings first on the ladder. Alex Abrahantes and Brandon Cutler even got involved with each other. It was all very fun but the spot that won the match was Kenny Omega hitting a One Winged Angel off the ladder bridge. PAC tried a black arrow but Omega got the knees up and then climbed the ladder to take the titles, and The Elite are the new Trios Champions.