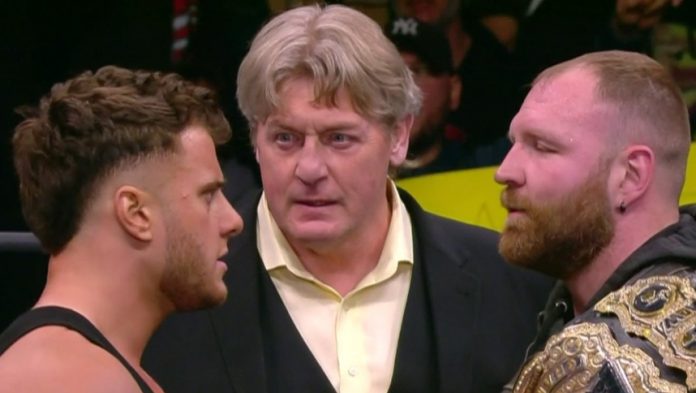 Dynamite comes back this week with a solid show. Built towards Full Gear this weekend in an alright fashion. In saying that, there was some great in ring action on this show. With a trios match, and a tag team match involving the four men competing for the ROH title at Full Gear.

A tag team match was made between all four competitors in the 4 way match over the ROH World Title at Full Gear. The dynamic of it creates some interesting situations. But regardless, this tag team match was fun and enjoyable. Claudio gets the win by submitting Jericho via a sharpshooter.

In terms of highlights this match gave it, Sammy was incredible in this match pulling off some great dives to the outside. As the match started it was more like a tornado tag until it settled down which was fun. Jericho tried to hit Claudio with his bat. Claudio was able to catch it, and won from there.

In terms of the match at Full Gear. I don’t see anyone else but Jericho walking out as champion. Based off the fact that he lost here, and that hopefully we restart the Jericho/Garcia feud. Though I’m not sure how it would go this time because Garcia has cooled off a bit.

Before the tag team title match at Full Gear between The Acclaimed and Swerve in our Glory. A singles match between Bowens and Swerve was put on the show. And it was a great match between the two. With Swerve picking up the win here. After the match Bowens looked to be somewhat hurt, I would assume this will be played up in regards to what Swerve has said about Bowens being injury prone.

Going into Full Gear I fully expect The Acclaimed to retain the titles. I could also see them retaining in part due to Swerve who turns on Keith Lee. In something that has been building really since they lost the titles. It also feels like their philosophies have changed. So it looks like that feud will be following Full Gear.

It is very cool to see Joe as a heel once more. He states it shouldn’t be shocking after attacking Wardlow. Powerhouse Hobbs comes out a little bit after, interrupting Joe. Before they get into a brawl between the two of them. Wardlow shows up from behind and attacks Joe, then a brawl between all three men ensues before they are separated by security and part of the locker room that comes out.

Fun segment. Obviously this is leading to a 3-way match with Wardlow, Joe and Hobbs. Which ended up being announced later in the show for Full Gear. So it will be held this weekend. With how dead the TNT title is right now, we could see Hobbs win it, and he goes on to hopefully build the title back up. With Wardlow and Joe entering their feud for probably Joe’s ROH TV title going into Final Battle.

This was such a fun match, hard to keep up. High flying action from basically bell to bell. It is fantastic to see Darius Martin back after a car crash kept him out for many months. AR Fox was very impressive in this match as well. Ultimately however, Death Triangle picked up the win as you’d expect going into Full Gear.

Post match, PAC  gets on the mic and states they know what has been going on with these vignettes. Shortly after, the graphic showed up on the screen in the arena with Death Triangle on one side. Against The Elite. So this confirms what has been thought for the past few weeks. That The Elite will return against Death Triangle for the Trios titles. The match at Full Gear should be phenomenal, very much looking forward to it. I think The Elite win the titles back and go forward as things were supposed to following All Out without the incidents.

Great match between these two, Ethan Page advances to Full Gear in the World title eliminator. The other side of the bracket has Brian Cage against the winner of Ricky Starks vs Lance Archer. When that second match happens I’m not sure but I think it will be Starks against Page in the final at Full Gear. It then makes sense for Starks to win there and move on to a World title match. Even though he will lose against Mox or MJF, hopefully it gives him much needed momentum.

Solid match here. Nobody thought Anna Jay would win this match and she didn’t, obviously. Jamie Hayter comes out after the match to confront Toni Storm. They go face to face in what should be a great match come Full Gear. I still expect the jealousy of Britt Baker to step in and cost Hayter the title. Because the story after Full Gear should definitely be Britt Baker against Jamie Hayter.

Mox comes out to the ring and addresses not only MJF, but himself, talks about what makes Jon Moxley a great champion. He is then interrupted by The Firm who come down to the ring and try to take out Moxley, and stop William Regal from getting involved as well. That is until MJF makes his appearance on Dynamite and takes out all the members of The Firm.

He then goes on to say that he wants to go into Full Gear with no excuses from Mox when MJF wins the championship. It was a good back and forth between the two men. Could it have been a better build overall? Yes. Should it have been? Yes. But I think it’s important that we see this side of MJF before eventually the real MJF comes back after Full Gear. I think he uses Brass Knuckles to get the win over Mox, claiming his first AEW World Championship.

While there is also a possibility of Mox retaining after the fantastic work he has done over the past few months. I think this is MJF’s time and we should have the ball rolling on an MJF World title run that will probably span up until 2024.