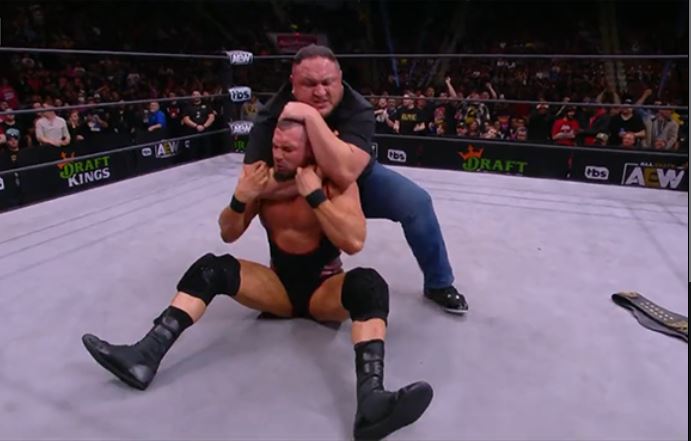 After last week’s disappointing show, AEW put on a solid show this week with some good things about it. Sammy Guevara vs Bryan Danielson and the face to face with Saraya and Britt Baker. But it still had some rather unimportant things on this show as well. Plus Full Gear I don’t think is being touted as much as it should be.

FTR & The Acclaimed vs Swerve in our Glory & The Gunns

A very solid fun match between these teams. Also a couple of nice spots that took everyone out on the outside. First by Swerve who took out everyone by doing a springboard diving corkscrew. Then Dax delivering a suplex to Austin Gunn landing on top of everyone. The Acclaimed and FTR obviously picked up the win here. There were some teases to a potential match between The Acclaimed and FTR.

There was another nice dynamic between Keith Lee and the rest of his team. Lee was more or less disapproving of some of the acts they did. All of this is leading to the break up of Swerve and Lee. Which will probably happen at Full Gear based upon that they won’t win the titles back, and Swerve is very much the heel of the duo, plus those mistakes during matches that sometimes tend to happen is bound to have a problematic effect. I could see it all going down after something like that.

This was excellent, to be expected at this point. His main talking point was how the spotlight has always been taken away from him. From when he started against Cody Rhodes, to the All Out media scrum incident. On each of these things, there was something else taking the spotlight over MJF.

He said he respects Jon Moxley for working as hard as he did to get to this point. But in the end it will be MJF walking out as AEW Champion.

I don’t know how much more we can praise this man for the work he does. It really is amazing, and I think at this point, it would be surprising if he loses at Full Gear. Now I don’t think he will lose because I feel like he would lose his steam if he lost. But he also may not be live on TV up until Full Gear because of the attack a couple of weeks ago from The Firm.

The TNT open challenge was nothing in this case. Ariya Davari was squashed in a meaningless match. After the match was the important part. Wardlow calls out Will Hobbs, and not so long after, Samoa Joe hits Wardlow in the back of the head with his title belt. For one, I hope this is a heel turn for Joe, simply because he is a insanely good heel. Two, it gives you a couple of options, because now you have another feud to build. Joe and Wardlow could be great, but also he’s not aligned with Hobbs.

This could also be heading for a 3-way match at Full Gear for the TNT title. Which also would be good and hopefully at some point the TNT title can legitimately be reignited. Can’t say I have my hopes up this time but it just needs to happen.

The big news out of this segment was something I think we all expected eventually, but Saraya has officially been cleared to wrestle. She then went on and cut what was probably her best promo since arriving in AEW. Impassioned about what she’s been through to get to this point. She then laid out the challenge for Full Gear to Britt Baker.

The match will be taking place as Saraya’s first match back since 2017. It will be very interesting to see how she gets on in what will be a big moment for her. Hopefully this match goes well and we can all look forward to a promising run in AEW for Saraya.

Fairly unimportant match here. It was a solid match from both guys, just not much on the line. It was only really made because Orange Cassidy will be defending his title against a member of The Factory this week on Rampage. Trent challenged Lethal and the match was made. Lethal unsurprisingly gets the win here. After the match on the stage Jeff Jarrett is introduced and we find as to why Jarrett is with these guys specifically.

Now it could be interesting, but right now I don’t feel there is any interest with these guys, and I don’t think adding Jarrett is a interesting way to go. But you never know, it could grow into something, at the moment though, I’m not seeing it.

As I keep saying with MJF, the guy does such phenomenal work. I thinkn the pivotal part here was when Mox started picking flaws in MJF calling himself the devil. Mox has met the devil, and MJF ain’t it. As much as I love seeing these guys to come out, cut a fantastic promo. I think it’s time we get a proper in-ring promo segment with the two of them face to face exchanging verbal barbs, because I don’t think we have seen that yet. Would love to see it.

Rather simple match here to help out Jamie Hayter to look good going into Full Gear with Toni Storm. Storm did back up Skye during this match to mitigate the numbers advantage. But all in all not too much excitement here, Jamie Hayter wins. The one thing is, there will be some screwy finish at the match at Full Gear, which will involve Britt Baker similarly to how it involved her back at All Out.

Bryan Danielson vs Sammy Guevara – 2 out of 3 falls match

What a match this one was. Out of two incredible wrestlers in the ring. Based on the crowd reaction there are a lot of people who really dislike Sammy. That’s fine. But when he gets into the ring, he delivers, and this was no different.

The first fall ended via a DQ, Sammy threw a chair into Bryan, then continued after the first fall attacking Bryan with the ring announcer mic, this busted Bryan open.
Second fall Sammy pins Bryan with GTH. Ties it up to 1-1. After an incredible battle in the third fall, Bryan wins it when Sammy passed out.

With this match being as good as it was, the 4 way between Jericho, Bryan, Claudio and Sammy should be incredible. It is a match I am looking forward to. In which hopefully we see Daniel Garcia full commit to leaving the JAS and beating Jericho for the ROH world title at maybe Final Battle.