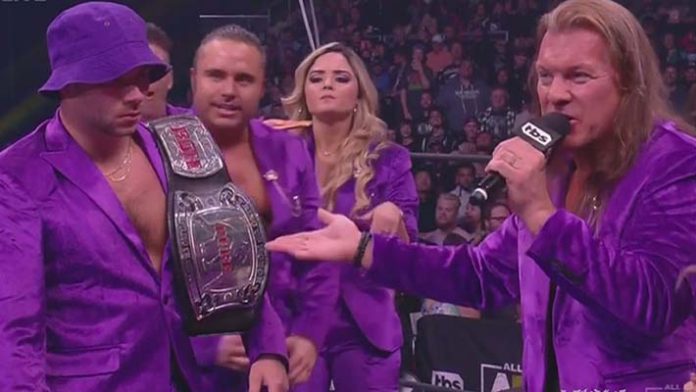 Coming off what has been a great few weeks coming out of All Out. This show was not as good as those weeks, but was still a solid show. Furthering the JAS and Daniel Garcia story. The Womens’s division so far seems to be on the right track after this show which hopefully continues.

Jericho and Garcia come face to face again. Teasing a breakup. Jericho asks if he is a Sports Entertainer or a Pro Wrestler. Before he can answer Bryan Danielson comes out to tell him he can do what he wants to do. When Jericho gets annoyed at Bryan, he says Garcia belongs to him. Garcia then gets on the mic and starts being more of a babyface than before. The crowd was really getting behind him. Garcia challenges Jericho to a tag team match with Bryan against Jericho and Guevara.

So with all this going on. I think this will begin to be built around ROH as both Garcia and Jericho are champions for the brand. With Garcia trying to save the ROH brand from Jericho and the JAS trying to destroy it. I could see Garcia vs Jericho ending up at Full Gear with that being the final nail in the coffin of Garcia in the JAS. Whether he ends up on his own or joins the BCC remains to be seen.

A match is made between Matt Minard vs Bryan Danielson as Bryan challenges any member of the JAS at the time.

Solid match. It was really designed to get these guys a match on the show. During the match, Claudio came out to take Angelo Parker out of the equation. He him hit with an uppercut on the outside. He got him so good that Parker lost one of his shoes. Absolutely fantastic.

Little better performance on the mic from Yuta here. MJF ends up coming out. In the end it sets up a match for next week between the two. The main thing from this segment was how well MJF played up the heel persona more as he has been getting more cheers since he returned. He ended up not saying his catchphrase at the end of the promo. Therefore, not allowing the crowd to chant along with him. Instead, the Gunns came out an said it instead. But it will be Yuta vs MJF next week which should be great match. Also seems MJF may go through the BCC before getting to Mox. I do think Full Gear is when MJF wins the AEW title.

Robinson attacked Mox before the bell. Going right on the offensive straight away against the AEW world champion. It was a championship eliminator match. If Robinson won, he would get a title match. It was a very good match. Blood during the match courtesy of Mox bleeding. Juice Robinson tapped out in the end to a cross-arm breaker. Now they did mention that Robinson was a free agent. So maybe he ends up on AEW TV more soon.

Post-match Hangman Adam Page comes out to stare down with Mox. As they will have a match for the world title in a few weeks. MJF interrupts and tells them it doesn’t matter who wins they will fall to MJF. He is up in the luxury skybox. Which Wheeler Yuta soon appears behind MJF. When he turns around, he gets thrown into the couch which tips over. Then into the row of seats below the skybox. That was fantastic and sold brilliantly.

But ultimately, he is right and MJF will be the eventual AEW world champion.

Cuts her first promo in AEW. Gets welcomed back into the wrestling scene by the crowd wonderfully. She proclaims she will create change in the AEW women’s division the way she did in WWE with Emma.

Calls part of the women’s locker room out. Toni Storm, Madison Rayne, Athena, Willow Nightingale, and Skye Blue. Soon after Britt Baker and her crew come out. Soon after Serena Deeb comes out for the match with Storm. Saraya says it will be a Lumberjack match.

The match flowed out of the promo segment. What’s good is that the segment was given time, as was the match. Serena Deeb kicked out of a Storm Zero. Finishes the match off with an avalanche piledriver which looked brutal. Toni Storm retains the title in a great match. Though the title is in a stage of static at the moment, waiting for Thunder Rosa to get back. Which is why a fully vacated title would have been a better way to go.

Hopefully this all means that the women’s division will be taken a lot better care of from now on. Whether Saraya ends up getting cleared and can compete at some point will be another thing to look out for.

Backstage a segment where Private Party and Butcher and Blade were arguing. Once both of them, Andrade and Jose walk away. Matt Hardy comes into frame. Seems to reconcile with Private Party. This could be alright; it would have to be handled better than last time though.

Very enjoyable match here. Bandido is incredible, the way he can fly around the ring while also being a very strong competitor. At one point he showed off his strength by holding Jericho in a vertical suplex position for over a minute. Which was amazing to see. Then just before the second ad break. Bandido hit a hurricanrana off the apron to the outside. In the end Jericho wins by submission with the Liontamer. Once again, he did win by nefarious means. He blinded Bandido with his mask and took advantage of that.

After the match Jericho proclaims he will desecrate the ROH name. He took down the ring announcer with a Judas Effect. This will 100% lead to a big problem between Daniel Garcia and Chris Jericho. Next week there will be a tag team match involving Daniel Garcia teaming with Bryan Danielson against Chris Jericho and Sammy Guevara.  Jericho also challenged Bryan to a match on the October 12th episode of Dynamite which will take place in Canada.

A solid week for Dynamite. Not too much newsworthy happenings on the show. But still alright nonetheless. The story progression for Jericho, Garcia and Bryan. Seems like they are finally doing something with the ROH brand. But next week looks good with Luchasaurus on the show next week. Bryan and Garcia vs Jericho and Guevara. Next week is also an anniversary episode of Dynamite.