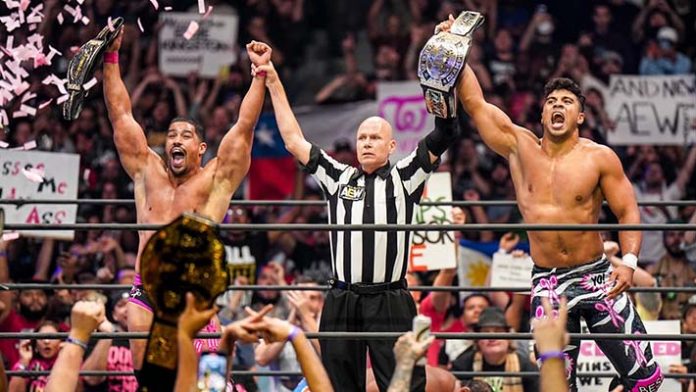 What a fantastic show Grand Slam was. From Championships changing hands, to an incredible debut that rocked the stadium. A whole night of incredible wrestling on this show as well.

Great match. Some great moments in this match. Claudio went to hit a Recola Bomb off the top rope, but Jericho reversed it into a frankensteiner. Claudio used the giant swing on Jericho, and did 20 rotations. Three times in the match Jericho tried to use illegal tactics. The first two times didn’t work as Claudio saw both coming. One being an attempted low blow and the second attempted to use his baseball bat. The third time however was the charm. With the referee getting in the way, she had her back turned, which is when Jericho hit the low blow, Judas Effect. Three seconds later he was the new ROH world champion.

This is a fairly shocking result. But now the story will probably continue with Jericho and Daniel Garcia. As after the match the rest of the JAS came out to celebrate. Garcia didn’t look like he wanted to be there. The way they won their titles happened in a different way. One honorably, the other dishonorably. Going forward we could see more of a rift develop between Garcia and the rest of the JAS.

Swerve in our Glory vs The Acclaimed – AEW Tag Team Championships

Similarly to All Out, Swerve and Lee are booed while also being very heelish. The Acclaimed got an amazing reaction as you’d expect. Max Caster hit a suplex on Keith Lee just before Bowens got in with the hot tag. The end of the match had Billy Gunn involved. Swerve  really instigated it which ended up costing them the titles. Bowens hit the arrival, followed by the mic drop by Caster. That was it. New tag team champions are The Acclaimed in another great match. The moment the three count was made the crowd came unglued.

This really was an amazing moment. After coming up short at All Out. The Acclaimed do it in New York. Both guys deserve it for the work they have put in.

This raises a question about Swerve and Lee. Swerve was being more of a heel than Lee during the match. Swerve also inadvertantly hit Lee with the boom box The Acclaimed carry out to the ring. I think a turn is coming sooner or later, and it will be Swerve turning heel on Keith Lee.

As Yuta was about to speak out comes MJF. Cheered like he has been since returning and even played into that a bit. The most interesting thing here was how the more the segment went on, the more Yuta was booed. It ended up in Yuta being taken down by W. Morrissey  who took out Yuta on the stage, followed by a shot by MJF with the dynamite diamond ring. Great segment though.

This was a great match. Once again Orange Cassidy proving how good he is. The crowd really started getting behind Cassidy near the end. But as they went outside the ring, both guys had their backs facing the ring. PAC grabbed a hammer from the timekeepers area and hit Cassidy with it. This knocked him out giving PAC the win. Very heelish from PAC but the story was that he didn’t take Cassidy seriously, but he could not put him away cleanly. So had to resort to cheating to retain the title.

I could see a rematch happening where Orange Cassidy picks up the win. Or alternatively PAC winning clean to show that maybe his opinion has changed on Cassidy.

There isn’t much to say about the match other than it was good. Athena had a cool spot showing her strength holing Britt Baker and Serena Deeb up. In the end Toni Storm retains by pinning Baker. This was the correct decision. After the match Baker beats down on Toni Storm and Jamie Hayter comes down to the ring. Her and Baker then continue the attack on Storm. So it seems this dissension between the two was a ruse. I really hope that this is temporary and the two do have a feud.

All of a sudden, new music hits. Saraya comes out, formerly Paige in WWE. Unbelievable reaction as the ring was cleared when she got into the ring. Incredible moment and hopefully we see this as a new beginning for the women’s division in AEW.

An absolutely incredible match. Everything about the match was so well done. Moxley putting a Lebell lock on Bryan, hitting a curb stomp on him too. Bryan’s hard strikes to Mox which sounded brutal at times. Bryan taking two death riders. One of which was on the ramp. Both men going out there and showing why they are the best at what they do. Awesome from both guys but Jon Moxley comes out victorious and is the new AEW World Champion.

During the match MJF was shown watching on from the stands, holding his poker chip representing his future title match. It was an amazing visual having him in the background of some shots where Bryan and Mox were seen beating each other over the title.

While you could’ve had Bryan win this match. It does make sense for Mox to win here. Even if he will lose it to MJF when they eventually meet one on one for the AEW World Championship. Really looking forward to the build for the match between these two. It is going to be something well worth watching.