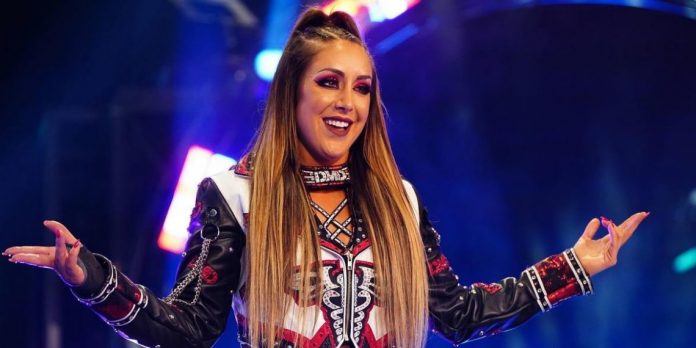 As PWMania.com previously reported, AEW star Britt Baker was asked who her dream opponent would be earlier this week, and she responded Sasha Banks. Baker revealed that she received a lot of backlash from fans as a result of her comments to Lindsey Brown and Adrian Hernandez of The Playmakers on 1140 The Bet Las Vegas.

“I literally answered an interview question. I didn’t call Sasha Banks out, I didn’t say, ‘Hey, this match needs to happen.’ I was just asked a question and I gave an answer. They said what’s a cool dream match that you would like to have and Sasha is one of my favorite wrestlers. It wasn’t me challenging her, or challenging WWE. All I did was just say ‘Hey this is a cool dream match.’

“Her fans and the WWE fans and even just some wrestling fans, in general, did not like that and I don’t even think they read the whole interview. They read the clickbait and they run with it. They create such a nasty narrative when they don’t even know what they’re talking about and it is so frustrating.

“Because in my position, I am not going to respond to @John515 that has 19 followers. But I want to respond to John with 19 followers and tell him to shut the hell up, you don’t even know what you’re talking about!”