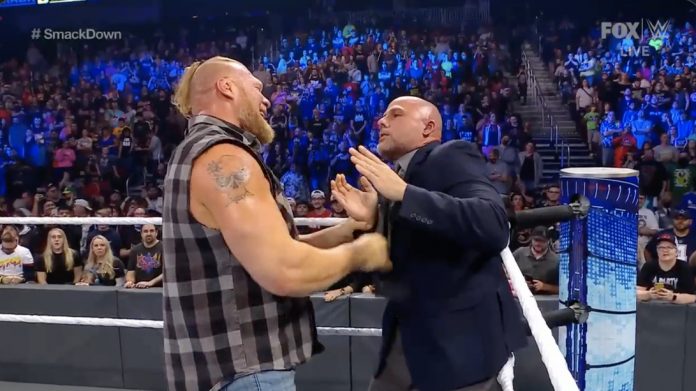 As noted, last week’s SmackDown saw Lesnar brawl with WWE Universal Champion Roman Reigns and SmackDown Tag Team Champions The Usos in an effort to get payback over being screwed out of the title at WWE Crown Jewel. The segment saw Lesnar attack a WWE camera man and other officials at ringside, which led to Adam Pearce suspending Lesnar indefinitely. Lesnar then confronted Pearce over the suspension and destroyed him in the ring.

In an update, Pearce issued a statement from his WWE HQ office during last night’s SmackDown and ruled that Lesnar has been hit with a fine of $1 million. This goes with the indefinite suspension that was announced last week.

There’s no word on when WWE will be brought back to the storylines, but he is rumored to return in early 2022 to continue the feud with WWE Universal Champion Roman Reigns, perhaps as a surprise entrant in the Royal Rumble. It was reported after Lesnar’s return at SummerSlam in late August that his current deal would carry him through early 2023, and that the deal was good for at least 8 matches, with the terms of the deal open to change with further negotiations. He has wrestled just one match since returning, and that’s the Crown Jewel loss to Reigns.

On a related note, the tension with Paul Heyman over Reigns and Lesnar continued this week in a backstage segment. Heyman caught himself getting hyped up while talking about Lesnar’s potential destruction, and tried to play it off, insisting that he hasn’t talked to Brock.