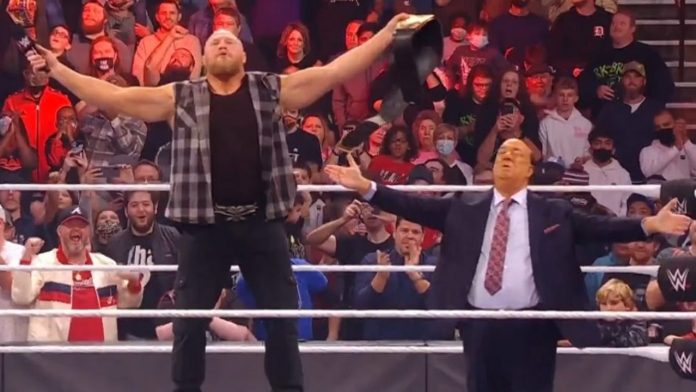 New WWE Champion Brock Lesnar and Paul Heyman are officially back together.

Tonight’s post-Day 1 edition of WWE RAW opened up with Heyman in the ring. He gave a grand introduction to the new WWE Champion, who came to the ring and stood on one half of the steel ring steps while Heyman praised him and bragged about how he negotiated Lesnar’s spot in the WWE Title match at Saturday’s Day 1 pay-per-view.

Heyman also addressed WWE Universal Champion Roman Reigns, who attacked and fired him on SmackDown two weeks ago. Heyman mentioned how Reigns will be vulnerable without him on the blue brand, pointing to how Reigns caught COVID-19 in just one week without him. Lesnar also addressed Reigns, mentioning how he knows Reigns is at home watching RAW to see the real champion. Lesnar also sent “get well soon” wishes to Reigns.

Tonight’s RAW will feature Big E vs. Bobby Lashley vs. Kevin Owens vs. Seth Rollins to determine Lesnar’s WWE Royal Rumble opponent. Heyman took shots at Owens and Rollins, and went on about how Lashley and Lesnar never met until Day 1. He recalled how Lashley got the upperhand on Lesnar a few times during the Day 1 match, but only because he came at Lesnar from the side or from behind, and at the Royal Rumble, if he earns the title shot, he will have to face Lesnar face-to-face, and go down in history as a Lesnar wanna-be. Heyman went on to praise Big E as someone who represented WWE well as champion, and said they have nothing but respect and admiration for him. Heyman also said if Big E becomes the #1 contender, they will enjoy the match but Big E will lose.

Heyman praised Lesnar some more and that was it for the promo. Earlier in the segment Lesnar thanked Heyman for everything and they both had a show of respect. You can click here for our RAW recap.

Stay tuned for more. Below are several shots from tonight’s opening segment at RAW in Greenville, SC: