According to fans in attendance at Saturday’s New Japan Showdown taping in Philadelphia, the former WWE star will make his promotional debut at the Battle In The Valley event, which is scheduled to take place in San Jose, California, on November 13. The announcement was made via a video.

Will Ospreay, Tomohiro Ishii, Jay White and Tom Lawlor are also advertised for the same event with tickets on sale now.

Murphy was released by WWE a few months ago due to budget cuts. 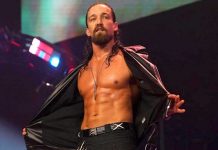