Cameron Grimes vs. Johnny Gargano has been announced for tonight’s WWE NXT episode on the USA Network.

As seen above, Jon Quasto talked to Grimes about issues he had with Gargano at weekend NXT live events. Gargano then addressed Grimes on WWE’s The Bump this morning. Grimes told Quasto that he will take advantage of Gargano being distracted by his “Takeover: Portland” match against Finn Balor this Sunday. Grimes went to NXT General Manager William Regal to get tonight’s match made official, and said he will send Gargano to Takeover with a loss.

Below is the updated announced line-up for tonight’s go-home edition of NXT:

* The final build for “Takeover: Portland” on Sunday 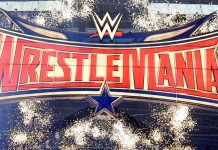 WWE PWMania.com Staff - 03/30/2020
Rusev took to Instagram Live today and revealed a new look. As seen in the fan screenshots below, The Bulgarian Brute revealed a new bald...

WWE PWMania.com Staff - 03/30/2020
During an appearance on ESPN's SportsCenter, Triple H was asked about the report that Bill Goldberg vs. Roman Reigns had to be "altered" and...

WWE PWMania.com Staff - 03/31/2020
In an interview with ESPN.com, Edge discussed his plans with WWE after the Wrestlemania 36 PPV: “Physically, I wouldn’t be able to keep up with...

Roman Reigns Confirms He Has Pulled Out of WWE WrestleMania 36

WWE PWMania.com Staff - 03/30/2020
In a video published to Instagram, Roman Reigns confirmed the news that he has pulled out of the Wrestlemania 36 match against Bill Goldberg....