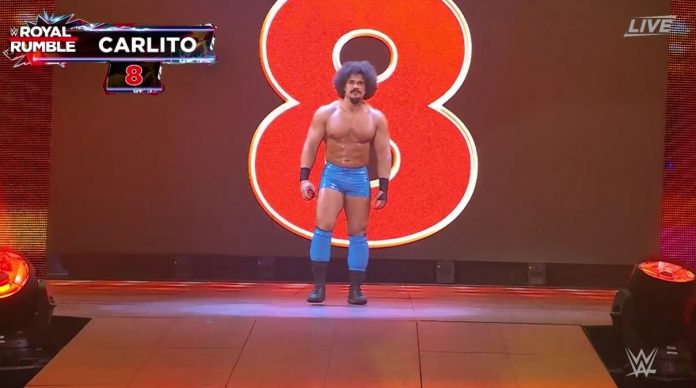 During the discussion, the longtime pro wrestling veteran reflected back on his surprise WWE return in last year’s Royal Rumble match, as well as his audition for the “GLOW” series on Netflix.

On his appearance in the 2021 Royal Rumble and how he was originally going to be used for the Raw Legends Night: “Originally, I was supposed to do the Legends Night a couple of weeks before that and then they canceled me and said, ‘No, we’d rather have you in the Rumble’ so, that was actually even better for me. Yeah, it was great. What sucked was people not being there. People don’t even know if I exist now… So yeah, it would have been cool to be in front of a WWE crowd again but, other than that, it was pretty fun. I met new people, saw some old timers. It was weird. The first half-hour was kind of weird and then after that, it was like I’d never left, you know what I mean?”

On how he got his role on the Netflix series GLOW: “Thank you very much [Carlito responded to a compliment about his role in G.L.O.W.]. I just auditioned like everyone else. I auditioned and somehow, they picked me.”

Watch Carlito’s complete K&S WrestleFest virtual signing via the video embedded below. H/T to POST Wrestling for transcribing the above quotes.