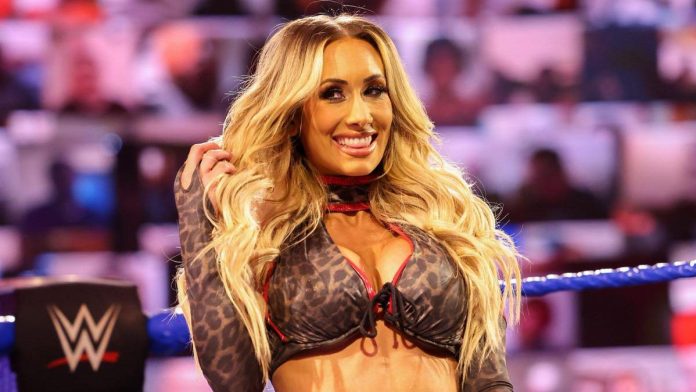 The WWE star has been quoting the saying on television and social media, most recently on Monday’s episode of RAW.

The WWE star captioned a picture of herself at the beach with the tagline.

A badass with a great ass 😎🍑 pic.twitter.com/o4V1S9uaR9

Many fans have pointed out that Markova actually came up with the line as a result of this. Markova once tweeted,  “I mean…. Who did it better? Let her know.”

I mean…. Who did it better? Let her know 😜 https://t.co/ndXdN7vX1V pic.twitter.com/K3Bt3fbhNU

Markova reacted when one fan inquired about her thoughts on this. She said, “Disrespected. Doesn’t matter who’s more or less talented. Law is the same for everebody.”

Markova first entered the wrestling industry in 2007, and from 2007 to 2017, she worked for the Russian company Independent Wrestling Federation (NFR). From 2011 to 2013, she wrestled in Japan for DDT Pro-Wrestling and Wrestling New Classic. She began her career in America in 2017, the same year that she went on a WWE tryout. Since then, she has performed in matches for EVOLVE, Shine Wrestling, and the AEW Dark series in 2021. Since 2021, she has competed for the NWA.

Carmella has previously been accused of stealing material for her gimmick; most recently, Angelina Pivarnick of MTV’s “Jersey Shore” pursued her because Carmella used the line “Ummmmm, Hellooooo.”

Here are some more tweets from Markova:

You like my catch phrase @CarmellaWWE Buy my shirt then 😜 @WWE #WWERaw Everyone knows I’m the real Badass with a Great Ass 😉 #MarkovaArmy won’t let me lie ❤️ pic.twitter.com/Cvyn3xCSgw