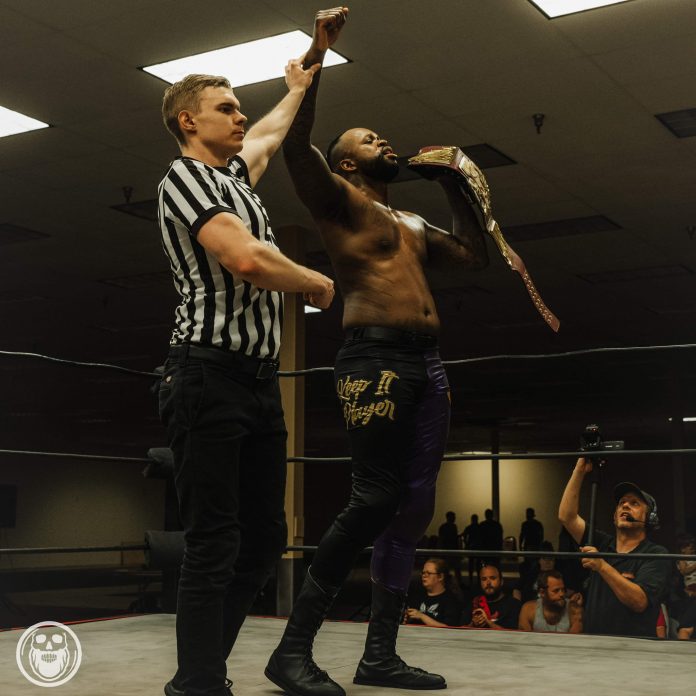 A champion’s mentality is a tale as old as sports, the ability to use natural gifts to their fullest potential through the mindset of complete preparation and execution. That approach can be seen at every level across a variety of sports, a place where the mental aspect is just as important as the physical competition. Micheal Jordan’s nearly obsessive approach to the game garnered half a dozen championships and a 10-part documentary series to tell the story behind it. Linebacker, Kevin Greene landed at the third spot all-time for sacks in his career, a tenure on the gridiron that saw him win numerous awards on the field during his nearly decade and a half in the NFL before he was on the coaching staff during a Green Bay Packers Super Bowl win. When he wasn’t chasing quarterbacks, he had a stint in the squared circle through a series of memorable performances in the 90s. In an age where political red tape hampers many top match-ups, Tyson Fury beat top competition to become the truly recognized Heavyweight champion in boxing.

The champion’s mentality is a combination of the preparation and execution.

One such professional wrestler that has all the physical tools to be the champion that he is today, is Pretty Boy Smooth, a 6’9 athlete that weighs in at 272 LBS. At a recent card earlier this month in Uniontown, Pennsylvania for Ryse Pro Wrestling, PB defended his Ryse Grand Championship against Jackson Stone, a former Impact Wrestling Gut Check winner that is known as “The Suplex Shogun” to his foes.

After a hard-hitting battle, where both men showcased their skills and had the rowdy crowd on the edge of their seats, Smooth got the three count to retain the title. However, much more goes into PB’s victory than just his size, speed, agility, and power.

Before Smooth arrives with his roller bag of gear at the Uniontown Mall, where a remodeled Burlington Coat Factory was transformed into a wrestling arena, he juggles what it takes it be a champion with what he considers championship responsibilities.

Long before championship belts were a part of his luggage, PB became hooked on the spectacle of professional wrestling the way that so many others have, he watched the Monday night wrestling competition with his dad. Later on in life, always following the sport, he went to an independent event with some friends while he was in college, and it was a decision that eventually shaped the direction of his life.

“I started bringing some friends to shows and they talked me into truly pursuing the passion, knowing it was something I truly loved but wasn’t sure I could do,” PB said.

Learning his craft for professional wrestling wasn’t much different than the higher education he pursued at Hofstra University in his native state of New York and then later completed at Mercyhurst University outside of Erie, Pennsylvania. He had to go to school to learn the ways of the squared circle.

A former Division I and then Division II basketball player at Hofstra and then Mercyhurst respectively, Smooth had the natural athletic gifts already, but needed to find the correct training center to maximize those tools. He chose the Absolute Intense Wrestling academy, a part of the AIW organization, one of the most established and tenured independent groups in the United States.

“Training at the AIW Academy under Johnny Gargano and Candice LeRae was great. They always had good, positive energy and encouraged us to get out of our comfort zone. I’m also grateful that they made sure we had a good base of the fundamentals before moving on to the more advanced things. Josh Prohibition and Dominic Garrini are now the head trainers and they are doing a fantastic job with the new class of students,” Smooth explained.

After several months of learning the ropes from two of the top stars of the modern era, PB Smooth made his debut in 2016 and his career has ascended on a steady pace since that time, working as a regular in AIW, as well as branching out to different promotions across and outside of the country. Despite his already impressive resume and seasoned wrestling status, many pundits have suggested that the 30-year-old is just now truly entering the prime of his career. Aside from the fandom and notoriety associated with being a recognizable name in the sports entertainment business, Smooth also cites personal growth for himself as a part of his journey in the sport.

From my storytelling, promos & marketing content, to what I do in that ring, who I’ve beat, and this title run, to product endorsements & movie roles I been in my bag for a grip showing this star power & I’m probably one of the most underrated independent wrestlers of 2022. pic.twitter.com/82Gz3XjQhB

Jumping rope in my opinion is the best cardio…. But anyway, @ParisIsBumping is this Saturday! If you haven’t gotten your tickets make sure you do! #KeepItPLAYER 🌊🌊 pic.twitter.com/Ac2i9ixzNn


With a Bachelor’s degree in Communications and then a Master’s degree in Organizational Leadership from Mercyhurst, PB Smooth looked to give back to the university through the awareness that he can raise as a professional wrestler, establishing the PB Provides Scholarship, a college fund created to provide financial assistance to African American students recruited to or already attending Mercyhurst, on the pursuit of a degree in Communications.

“My goal is to help recruit more students into that program, while also giving back to my black community and help diversify the school,” he said of the noble cause.

PB Smooth’s style and presentation meshes with his power and physicality to create a persona all his own. As he continues to climb the ranks of the sports entertainment world, he is also beginning to find success in the world of acting, landing roles into two upcoming independent films Pact Of Vengeance and Shingles:The Movie.

Starting next month, screeners will be sent out for PACT OF VENGEANCE to different distributors to see where it goes! Until then, for the next few months you can see the film when you sign up to https://t.co/EH1BW3ry9v pic.twitter.com/FbgwsZmR5q


When he’s not on set or in the ring, Smooth has a strict workout regiment and fitness program to keep himself strong and his mind sharp. Despite all of his projects, he remains focused on his status as Ryse champion, a title he will defend at their next event on July 9th in Uniontown.

“Being the Ryse champion is the most important thing to me right now. A lot of people want to find their way into the super big independent wrestling companies, which is cool and all, but in my opinion, the measure of a true star is the ability to help build a house from the ground up. My goal is to be a fighting champion that builds this company up every chance he gets. I want Ryse to have a larger reach and I want to prove that I can be the guy to help bring that to fruition,” Smooth concluded.

“He has exceeded all my expectations. I’ve seen the crowd that went from being unfamiliar with him embrace him. I’ve seen him take on opponents of wildly different styles and thrive against all of them. I’ve seen him forge his own identity and have the courage to be himself, bucking the preconceived notions of what a giant could be in this sport. And I feel like we’re just getting started. Beyond proud to have him as the Grand Champion and flag bearer for Ryse,” said Chris LeRusso, head organizer and member of Ryse management.

So, how does PB Smooth maintain his status of pro wrestling champion, traveling competitor, actor, and a role model to the community through his scholarship fund?

The answer is, he has the champion’s mentality.