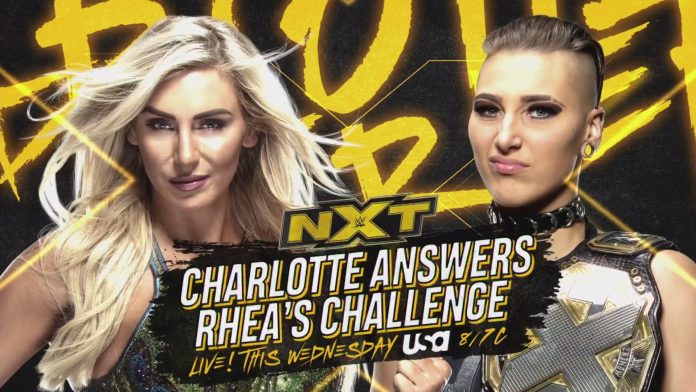 Charlotte Flair has been officially announced for Wednesday’s WWE NXT episode on the USA Network.

As reported tonight earlier, Flair was confronted by NXT Women’s Champion Rhea Ripley on tonight’s RAW from Salt Lake City. Ripley encouraged Flair to use her Royal Rumble title shot to challenge for the black & yellow brand title at WrestleMania 36. The two faced off without getting physical, but Flair did not answer the challenge.

WWE later announced that Flair will make her return to NXT TV on Wednesday’s episode to respond to Ripley’s challenge. As previously reported, Ripley and Bianca Belair will also have a segment on Wednesday’s episode as they face off in the ring to promote their title defense at NXT “Takeover: Portland” on February 16. It will be interesting to see if Flair interrupts that segment, which could potentially set up a Flair vs. Belair singles match.

Below is the NXT Twitter announcement for Flair’s return to the brand, along with Twitter comments from Ripley, who took to the site to taunt The Queen after the segment:

Well? I’m down for a fight… Are you @MsCharlotteWWE? 👹#WWENXT #RAW https://t.co/WsCI1WbqbJ