Charlotte Flair is currently scheduled to be at Takeover to further her storyline with NXT Women’s Champion Rhea Ripley, according to PWInsider. There’s no word yet on what they have planned for Flair at Takeover, but a confrontation with Ripley is likely.

That confrontation could come after Ripley’s title defense against Bianca Belair. It’s believed that Ripley will retain in that match, and then go on to defend against Royal Rumble winner Flair on The Grandest Stage of Them All.

Ripley recently called Flair out on RAW and Flair then appeared on NXT, but ended up double teamed by Belair and Ripley. Ripley returned to RAW last night and defeated Sarah Logan in singles action, then had words with Flair. They both left the show without Flair accepting the challenge for WrestleMania 36. It looks like Flair may wait until after Ripley retains over Belair to accept the challenge. 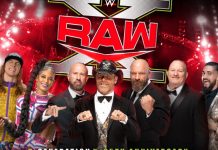