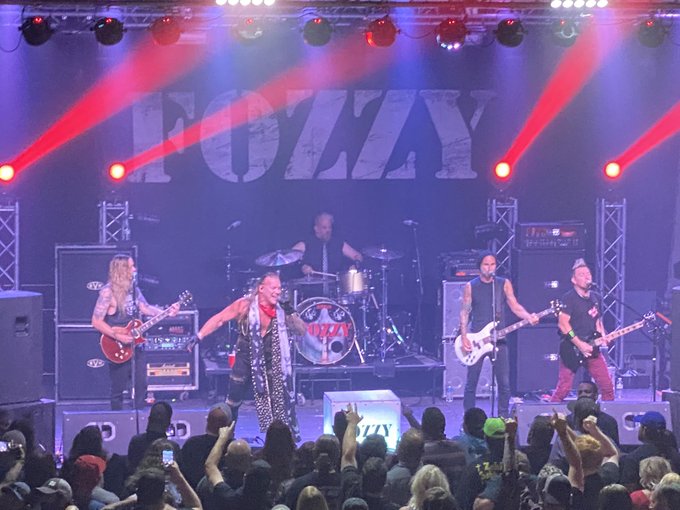 A photo has surfaced on social media of Chris Jericho performing at a Fozzy concert in Minot, ND on Saturday night. Fans on Twitter have criticized the concerts due to the photo showing a moshpit with a lack of social distancing and people not wearing masks.

Almost all of Fozzy’s tour dates that had been scheduled for the summer were postponed due to Covid-19. However, Jericho noted during his weekly Saturday night live stream that several August tour dates were not cancelled due to low Covid-19 numbers and thus the band was allowed to proceed.

“The venues are either outside, or they are half capacity. We are sold out tonight in Minot with I think 50% capacity, last night we were sold out in Sioux Falls, SD with 35% capacity. We hand out masks at the door, the temperature checks. We stay on the bus all day, the Fozzy crew and camp have been tested.” (quote courtesy of HeelByNature.com)

Fozzy is playing another show today at the Iron Horse Saloon in Sturgis, SD. The annual Sturgis bike rally is currently taking place in the town which has been criticized due to the large amount of people not practicing social distancing and not wearing masks. It’s believed that as many as 250,000 bikers are at the event.

Jericho is scheduled to wrestle Orange Cassidy on this coming Wednesday’s edition of AEW Dynamite and fans have been calling him and the band out:

Hey @TonyKhan you cannot by any means allow @IAmJericho at any @AEWrestling shows for 2 weeks if he's going to be playing freakin' Fozzy shows in venues like this tonight & tomorrow. It's irresponsible as hell & he needs to quarantine lest he put the whole company at risk. https://t.co/XgoWp7kKNs

Tell me people aren't risking their lives for a Fozzy concert 🤦‍♂️ https://t.co/xlc6KUamyB

Tfw you become the judas in your mind 🤦‍♀️🤦‍♀️🤦‍♀️ what a fucking joke. I love jericho but this is such a bad look for him, AEW, and fozzy pic.twitter.com/UPr6M1oOyC

I feel for performers that generally live hand to mouth. But that’s not Fozzy’s situation, they can’t use the starving artist excuse. They didn’t NEED to play that show.

Fuck Chris Jericho. He has shown he’s a Trump supporter and clearly doesn’t take the virus seriously. It’s so irresponsible to have done this. Wonder what Tony Khan will say.

I seriously hope Tony Khan and the rest of the higher ups at @AEWrestling have Chris Jericho self isolate for a couple weeks after having a freaking FOZZY concert with a ton of people showing up. Kind of doubt it though.

Nice to see Chris Jericho holding a Fozzy concert with no Social Distancing or Masks.

Hey Tony Khan you gonna do something here? Gonna like fine him and keep him off Dynamite for the next couple weeks?