During an appearance on Busted Open Radio, Chris Jericho talked about other WWE stars possibly joining him in All Elite Wrestling:

“By me joining the company I think fans and wrestlers most importantly go, ‘Holy sh*t this is real.’ Because if Jericho went there this is real. Because a lot of people don’t know Kenny or Cody or The Bucks. We know them, but your average fan doesn’t. Your guy in the WWE making a decent living, but thinks they can do better now knows, ‘Wow, Jericho can go there I can go there too.’” 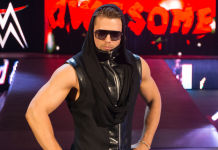