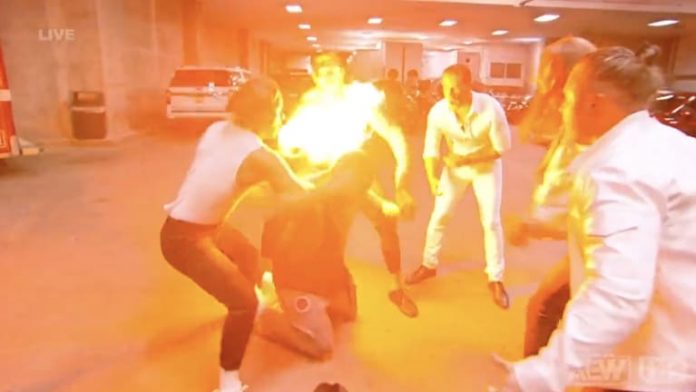 This week’s “AEW Unrestricted” podcast has Chris Jericho as a guest. Jericho discussed his first meeting with Tony Khan, why he signed with AEW, his initial intentions when Dynamite started, and all of the wrestlers he has worked with thus far.

To throw the fireball at Eddie Kingston, Chris Jericho claimed he needed a magician’s license:

“I had my magician’s license. You need that to throw a fireball in the vicinity of Vegas. The problem was it didn’t come in time, so we had to go outside the boundaries of Vegas to throw the fireball at the stagehand. ‘Guys, don’t tell me why it’s not going to work.’ My internal, ‘(Wayne) Gretzky stay ahead’ is we needed to throw another fireball today. It’s at the peak. Next week would be too late. We figured it out, made it happen, the kid took the fireball, and now it’s a thing. I did it one more time with Shota Umino. That’s it. I never have to throw it again. I can fake it, I can tease it, or maybe I do. It’s now part of Chris Jericho canon.”

Chris Jericho describes the injuries he’s had in AEW:

“Barbed wire everywhere, I broke my nose. Week after, Wheeler Yuta, my big toenail fell off. Moxley, I got gashed open and I have a bruised larynx. We just had to postpone our Fozzy tour because I have no top range from that match. It happens. It’s part of what we do. But it also shows the intensity and how well these matches are working.”