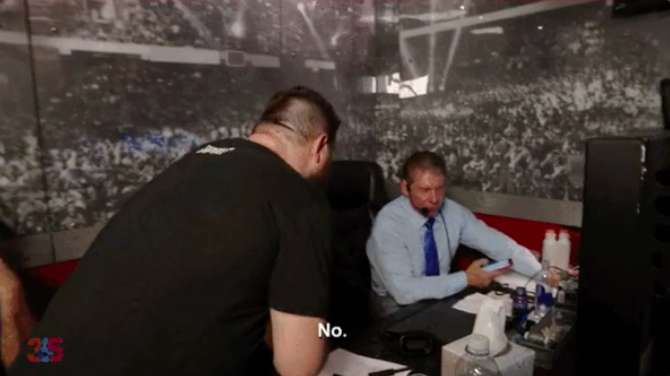 Following Kevin Owens’ match against Chris Jericho at WWE Wrestlemania 33 in 2017, Owens approached Vince McMahon backstage about the match. Here was the exchange…

In an interview with TalkSport.com, Chris Jericho addressed what happened:

“He told Kevin it was the ‘worst match in WrestleMania history’ [laughs]. I never heard anything about that. When I came through, Vince went [thumbs up], so I think he was on Kevin’s case at the time. I think he was going through a phase where he thought maybe Kevin had some extra weight that he wanted him to lose or wasn’t happy with his work as a heel.”

“Kevin is a very unique performer in that he’s amazing and he’s a bigger guy. Who cares? Mick Foley was a bigger guy, Vader was a bigger guy, Bam Bam Bigelow was a bigger guy. Didn’t affect their work, they were still great performers and Kevin is one of those guys. For whatever reason, Vince goes through phases where you just get stuck in his craw and he gets pissed off at anything you do and maybe that was one of his reasons. But yeah… the worst match in WrestleMania history?! I was like ‘have you not seen Giant Gonzalez vs The Undertaker!’”