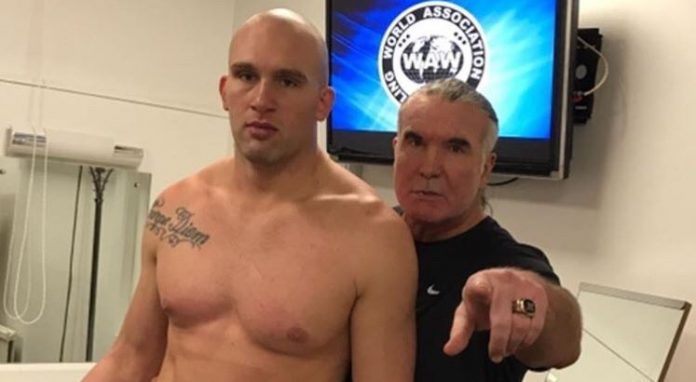 As a result of complications from hip replacement surgery, WWE Hall of Famer Scott Hall passed away on March 14 at the age of 63. Cody Hall, his son, recently discussed how he is adjusting to his father’s passing on Chris Van Vliet’s “INSIGHT” podcast.

“I guess in some sense [I was kind of ready],” Cody said. “I had kind of mentally come to terms that my father was not going to live forever. He liked to be a rockstar, even when he came back to life. He liked to drink, liked to party and liked to stay out late. He had those crazy nights, but when you live that life you don’t live to be 80, 90 or 100. So I always knew, but goodbyes are hard like change is hard, so I wasn’t ready for it. So I am still trying to come to terms with it, but I believe that he is in a better place.

“By the time I did see my father, it was pretty clear that this wasn’t going to be a kickout situation. He was ready to go, and I accepted it for him. I wanted him to move on and to not be in pain anymore. So it’s this kind of life, we are always going to lose our father’s at some point. I’m just glad mine was a great one before it happens.”

“My father was like my best friend to me for a while,” he said. “Definitely in those years in Atlanta, that’s all I ever wanted, because I feel like I never really got to know him growing up. So I stopped looking as him as a father, because the things he would do would hurt too much. But I embraced him as a friend, he was one of the boys and my buddy that I could talk about all the regular stuff with. That’s what made all the difference for me.”

Cody disclosed that his sister and he will share their father’s WWE royalties. At his father’s burial, WWE Executive Vice President of Global Talent Strategy & Development Paul “Triple H” Levesque told Cody about the royalties. Scott previously sold some of his WWE royalties, Cody also disclosed.

“I think that is possible. I think Triple H mentioned to me and my sister at my father’s funeral that some royalties should be coming our way,” he said. “But I’m sure that something that I can sit back on my laurels for, but a little extra money never hurts, peace of mind.

“Once upon a time when my father was not doing so well and hard up for cash, he did sell a portion of his royalties for a lump sum. So I don’t think they are nearly what they should or could be. So that’s why I say that I am not trying to look to pave the way for me.”