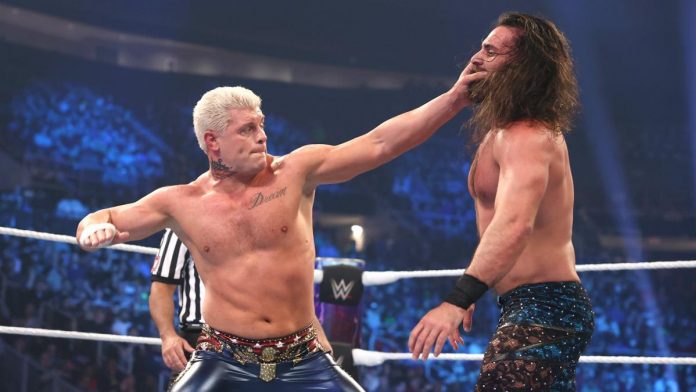 At Wrestlemania 38 earlier this year, Cody Rhodes made his return to WWE after a 6-year absence. It was something that everyone was excited to see, and a moment that truly will live in wrestling infamy for a lifetime to come. What followed that return was an instant classic match with Seth “Freakin” Rollins, who had been clamoring for a Wrestlemania opponent. They tore the house down in a match that was built on the story told by Rollins alone and by the hype of Cody merely possibly returning to the company where his career began. But, would this also be the beginning of a trilogy of matches that will go down as one of the best of all time?

These two men actually have 4 matches that can be raved about to this day, but in 2017, they went to war on 3 separate occasions: Wrestle Kingdom 11, Dominion, and in the G1 Climax. Their first battle was a 45-minute rating breaker that saw Okada leave as still the IWGP World Heavyweight Champion. Their second battle was the infamous 60-minute time limit draw where neither man could put the other away. The third saw Omega finally defeat Okada, albeit in a non-title match, to advance in the G1. It wasn’t until their fourth matchup (not counted for the sake of this discussion) that Omega finally defeated Okada for the title. But, in those first three matches, we saw Omega and Okada draft up a story like no other. Omega going from the depths of defeat to survival at all costs, and eventually to finally defeating Okada. It was perfection in every sense, and one of the best series of all time.

This is an example of a trilogy that focuses solely on Wrestlemania matches, despite their probably hundreds of battles in their time at the top of WWE. At Wrestlemanias 15, 17 and 19, Austin and Rock proved to be the pinnacle of the business for a reason. While their Mania 15 match falls a bit flat, their Mania 17 match is highly regarded as one of the best matches in WWE history, capped off by Austin turning heel and shaking hands with Mr. McMahon. This is the peak of WWE storytelling, and once again, two of the all-time best doing their thing at the highest level. Then, at Mania 19, they had what would be Austin’s last match for 19 years as Rock sent him into retirement with another legendary battle. It’s one of my personal favorite trilogies ever, and it was fantastic.

Now for our most modern example, featuring a man who’s the centerpiece of this comparison on the other side as well, Seth Rollins. If that doesn’t go to show that he is quite literally one of the best in all the world at what he does to have two series of trilogies in less than one calendar year to be discussed as some of the best of all time, nothing ever will. Seth and Edge told a simple story of two men who have done it all needing to beat each other for different reasons at first, with things getting deeper and deeper and more and more personal as the months went by. Edge was fueled by the desire to prove he still had it in him to hang with some of the best, while Seth wanted to defeat the legend to solidify his place in the history books. Edge survived at SummerSlam in one of the best matches of 2021, but Seth got his revenge at Madison Square Garden a month later. I was in attendance that night at the Garden, and to see such a spectacular match on free TV was a sight to behold as a fan. Then, in a match that somehow exceeded the already high expectations, they went to Crown Jewel inside Hell in a Cell and stole the show, and won WWE’s match of the year. A masterclass in storytelling AND in professional wrestling, this is how it is done.

I can go on, and we can go even further back in time. Think of the matches between Ric Flair and Ricky Steamboat, as another all-time classic series. There are so many to choose from, but why are Cody and Seth here now? Very simple. Their story resembles a little of each of the 3 rivalries I dove into. Allow me to explain.

They mirror Austin and Rock because Stone Cold won those first two matches at Mania 15 and 17, the second by nefarious means. While the magnitude is 100% different, Cody has won the first two of these battles, the second at Wrestlemania: Backlash by pulling the tights. They also mirror Okada and Omega because they’re telling a very simple but dedicated story while also exceeding already high expectations. Finally, they are following the Edge and Rollins storyline of last year because, as it seems to be building to, they will be headed inside Hell in a Cell to blow off their feud at the show of that same name in a month’s time. That match is not confirmed as of yet, but it seems likely, and I for one am very excited about it.

Now, this is super subjective, and I don’t want to say it’s THE best ever, but it is in the conversation already. Now if they step foot into that Cell and do what they did the first two times out, then we are looking at one hell of a series of matches to talk about for years to come, regardless of who wins inside the demonic structure.