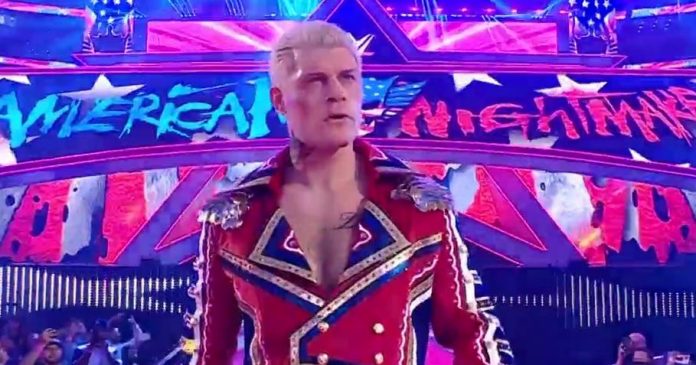 During the latest episode of WWE After the Bell with Corey Graves, The American Nightmare Cody Rhodes joined the show to talk about his return to the WWE. The son of WWE Hall of Famer Dusty Rhodes mentioned how he told several of his friends about his desire to return to WWE and revealed that NWA World’s Heavyweight Champion Matt Cardona is someone who heavily impacted his decision to come back to the company.

“A very small circle of people when this initially was brought to me knew and I told him everything, every detail, everything and I was really legitimately expecting him to go ‘don’t do it, don’t,’ and man, he went completely the opposite way,” Rhodes said. “He was of your train of thought Corey of that’s the ultimate undeniable, come back and land in the fashion that you did and he inadvertently set all of this in motion. I really thought he was going to say go the other way but man no, he was gung ho [about me going back to WWE].”

Speaking of the close circle of people Rhodes had asked about making his return to WWE, Cody revealed that he also was given some advice from WWE Hall of Famer Diamond Dallas Page, who was on the fence about his decision. Cody Rhodes detailed how DDP took a fatherly approach to his return but ultimately supported his choice to leave AEW.

“I think there was one person that was concerned and that was DDP,” Rhodes said. “He came over to my house and downstairs we have the Nightmare bar, he came down there and I just got one of these bartesians where you get the instant cocktails and I was really excited to show him the light margaritas and he drank all the ones that I had in stock and over the course of the six or seven margaritas he kept slamming down, he was just really tensive. He brought up a good point, the last time I did something major leaving the WWE, he was of the same thought process. ‘Well if you believe, if you’re confident than I’ll be confident with you and confident for you,’ and he gave me some tips on people to speak to and people to let things know before it all went down. He was the only one who was a little bit more fatherly and like okay, let’s make sure this is really what you want and not just a knee-jerk thing. For the most part, everyone who knew in that very small circle was like absolutely go do it, absolutely, which surprised me.

Lastly, The American Nightmare spoke about his future with the WWE and why he doesn’t envision himself wrestling forever. Cody Rhodes highlighted how early he started his wrestling career and how it’s taken a large toll on him, wrestling so many dates at such a young age.

“35-42 is historically men’s wrestlers’ prime,” Rhodes said. “I was a slow learner, Seth Rollins is a much faster learner than me, he got to the mountain top quicker. I genuinely felt that there wasn’t a better wrestler in the world than me and I know people who qualified it a hundred different ways. Work rate, promos, charisma, they get into all these categories. To me, wrestling is about a discussion, pro wrestlers create a discussion week-to-week. Are you talking about this guy or that girl? Are you interested in seeing this match? All that aside, 35-42 is the wrestler’s prime so I didn’t want to lock myself out because hey, I didn’t get the big one I wanted when I was there last time.

“Frankly, I wasn’t ready or prepared, I wasn’t doing the work to get it. Now, this has been presented as an opportunity to go for it, to try and I didn’t want to lock myself out age-wise. I could be doing this till I’m 50 like my brother who’s doing this still at a high level but I don’t think for me I’ll be able to have the ability to do it beyond this 35-45 window and the reason I say that is because I started at 20 and I was a bad guy my whole carer so all I did was fall down, take bumps. I was on the WWE schedule, Friday, Saturday, Sunday, Monday, Tuesday sometimes, that makes you go from 35 to 65 real quick. So that’s in my mind and I want to do it while I’m the best and I absolutely am. I want to do it when I’m at the top of my game.”

As far as what’s next for Cody with the WWE, a WrestleMania 38 rematch with Seth Rollins is scheduled for WrestleMania Backlash on May 8.

(Credit to Wrestling Inc. for the transcription.)