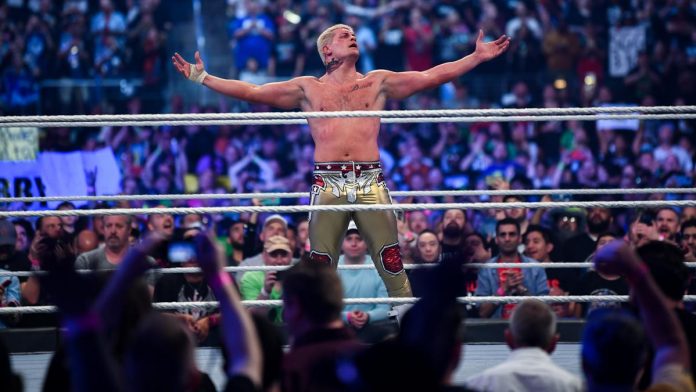 Monday’s RAW will take place from the Ford Center in Evansville, Indiana. A new match and a new segment has been announced for Monday’s WWE RAW episode.

Cody Rhodes is scheduled to face The Miz in singles action on RAW next week. Regarding the match, WWE’s official RAW preview noted the following, “Before Cody Rhodes steps inside Hell in a Cell, he will look to build momentum for the Premium Live Event when he takes on The Miz. The A-Lister will no doubt try to steal the spotlight from the returning Superstar and earn the respect he believes he’s due, but will Miz be able to pull one over on The American Nightmare?”

Becky Lynch will also address last week’s main event loss to Asuka, which saw Asuka replace RAW Women’s Champion Bianca Belair as the new #1 contender for a title opportunity at Hell In a Cell. WWE’s official RAW preview wrote the following on the match, “Becky Lynch’s inspirational rise back to the Raw Women’s Championship took a major detour last week when Asuka surprised Big Time Becks by spraying green mist in her face and rolling her up for the pin to earn a title opportunity against Bianca Belair at Hell in a Cell. How will Lynch respond after having her title hopes go up in mist at the hands of The Empress of Tomorrow?”

Bobby Lashley’s “All Mighty Challenge” for Omos and MVP is also confirmed for Monday’s RAW. There’s no update on what the challenge will consist of. The official RAW preview noted the following regarding the challenge, “Despite being launched through the side of the steel cage, Bobby Lashley walked away victorious in his cage match against The Nigerian Giant Omos. Now The All Mighty steps back into the ring with a special challenge for Omos and the double-crossing MVP. What does Lashley have in store for the destructive duo? Tune in to Monday Night Raw at 8/7 C on USA to find out!”