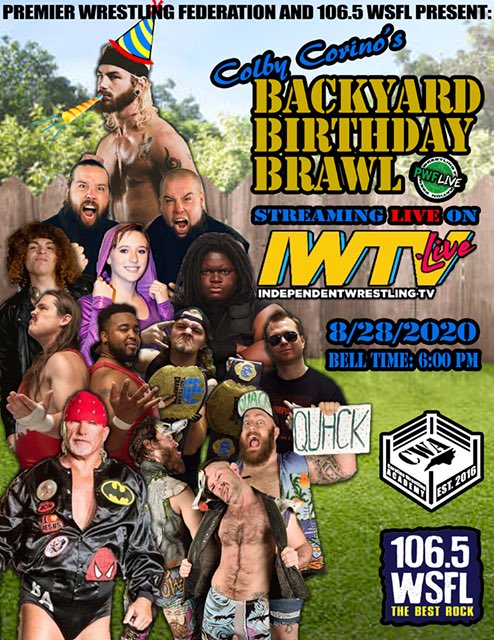 Two years ago, I penned an article about Colby Corino, the second generation grappler that had quite literally grown up in a squared circle, running around empty ECW venues before the doors opened for that night’s mayhem. At the time, Colby had just reemerged onto the independent circuit, refreshed and healthy, as he prepared to live up to the potential that so many saw in him from such an early age. It was easy to cheer for the young wrestler because he genuinely sounded dedicated toward the goal of putting his talents to use inside the ring ropes, not squandering the opportunities he was provided.

Since that time, the blond-haired technician has not only stayed on a healthy path, but he made strides that got him noticed and represented the family name very well, logging hundreds of miles on weekend trips to events for the chance to hone his craft. Pennsylvania, New York, Michigan, and Chicago were just a few places on the map for him as he zigzagged along the east coast and into the midwest to establish himself as someone to watch on the indy scene. Along with a brief appearance on 205 Live in early 2019, Colby elevated his profile with stellar work in Evolve as a part of the Unwanted Stable with indy standout Joe Gacy and the freshly-signed AEW competitor, Eddie Kingston. Despite the notoriety and gaining more exposure through those opportunities, Colby recognizes the importance of continuing to polish his game to achieve the biggest platform possible.

“I’m very satisfied with everything I’ve done in the last two years. I’ve wrestled on 205 Live, RAW Underground, Evolve, wrestled at the last ever Warped Tour for Game Changer Wrestling, and so much more, but those things just feel more like steps in the right direction rather than achieving my goals. I felt I’ve grown so much as a performer in the last two years and I can’t wait until everyone sees what I can do,” Colby explained.

In the midst of watching his stock in the professional wrestling world increased, he experienced something that completely eclipsed standing in a giant arena full of screaming fans for a WWE taping or soaring through the air at an Evolve event, as his son, Orion Steven Corino was born happy and healthy on May 8, 2019. The newest Corino definitely has sports entertainment in his DNA, as he often plays in the ring at Carolina Wrestling Academy, where Colby helps as a trainer with other veteran coaches. As much as he gets an adrenaline rush from inside the ring ropes, nothing compares to the role of family man for him.

Yesterday, he turned 14 months old. Today, we went over the basics of match psychology. pic.twitter.com/HTTC06BKTa


“It was the greatest thing that has ever happened to me. My perspective on the business aspect of wrestling completely changed for the better and his presence in my life motivates me and gives me so much drive to succeed for my family so we can live a comfortable life. I think I adjusted to father hood pretty well. I’m a homebody anyway, so having a whole little family of my own to share my life with is pretty great,” Colby said.

Promo practice! He’s showing me a thing or two on the mic 🎤 pic.twitter.com/fQO7ynqazc


In a moment that was a major contrast to the mayhem that usually takes place in the ring, Colby and his dad, former ECW and NWA champion, as well as current WWE Performance Center coach, Steve Corino were sitting in the backyard to enjoy the warm weather. During the course of the conversation, Steve, who has a roadmap of scar tissue to decorate his forehead as a reminder of his days in the ring, sipped on a coffee when he made a suggestion for his son’s birthday. Considering that Colby is most at home inside the squared circle, why not bring the square circle to his home? With a variety of connections through the previously mentioned Carolina Wrestling Academy and
Premier Wrestling Federation, Colby realized he could get all the equipment that he needed to produce an event in his own backyard.

Thus, the concept of “Colby’s Backyard Birthday Brawl” was announced for this Saturday with plans to stream the closed set production live on independentwrestling.tv for fans around the world to be able to watch safely for the comfort of their own home. But, Colby isn’t taking even his birthday celebration lightly, as he considers the ability to follow proper safety protocols to be the most important aspect of this event. Furthermore, he hopes that the blue print he puts forward can be an example for other independent groups, as many struggle to maintain their business model during the economic crunch of the pandemic.

The GEORGENasty Boys vs the OG Ugly Ducklings that is!


“Running a show during a pandemic definitely makes things a bit more stressful, but if the alternative is no wrestling at all, we’ll do whatever we have to to work around the obstacles. Some of the measures were taking are not opening the show to the public and exclusively streaming the show on IWTV, obviously doing the show outside in an open air environment, requiring masks for everyone not in the ring, enforcing social distancing as much as possible, having a sanitation crew to sanitize the ring in between matches, requiring all performers get tested for COVID before coming, and having sanitation stations on site. It sounds like a lot of hurdles but independent wrestling is in shambles at the moment, and the ones left standing in the rubble can’t wait for someone else to rebuild it. It’s up to us, and I hope this show is a step in the right direction,” he commented.

Trying to focus on the more entertaining aspects of the sports in such a bleak year is challenging, but Colby looks to bring together a talented cast of Carolina stars, including The Ugly Ducklings, accomplished veteran George South, and many others to give the fans a show they can enjoy while he spends his 24th birthday with his friends and family.

“Fans can expect a fun night of wrestling. I am putting my trampoline and pool next to the ring, so expect craziness and probable shenanigans. There may be some names on the show that some fans may not recognize, but they will definitely remember their names after watching. This is the first show we’ve ever streamed live on IWTV and everyone is very excited to show out what we can do. I hope fans give us a chance to entertain them. My birthday wish is that people tune in and just enjoy wrestling for a night. We can’t wait to perform for you, and I hope you can’t wait to watch us. I’m so excited to just be able to wrestle,” he said.

So, while the term “In Your House” will always be a part of the wrestling fan lexicon, Colby Corino will quite literally invite fans in his house through the power of the internet to celebrate his birthday. For Colby, the production will be highlighted by cake and drop kicks, but it also is an example of how someone can overcome obstacles and in their life and find true happiness. This Saturday Colby Corino celebrates his 24th birthday in the sport that he loves surrounded by the friends and family that he loves, in a showcase to entertain the fans that have supported him on his journey in the professional wrestling industry.

For more information to order the event, go to www.independentwrestling.tv