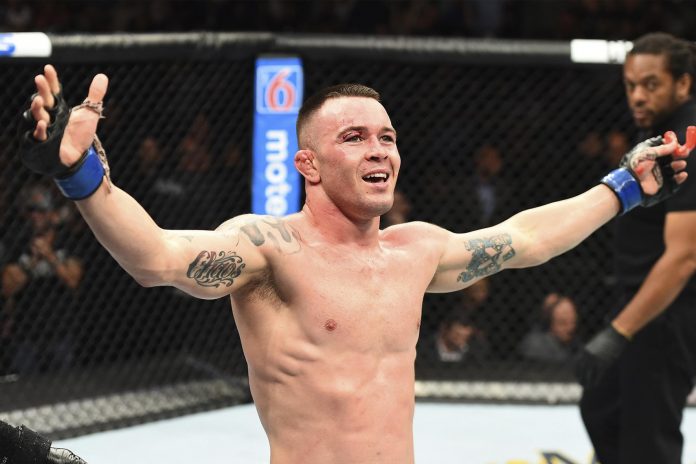 UFC fighter Colby Covington did an interview with Sports Illustrated just days after he beat Jorge Masvidal by unanimous decision in the main event of UFC 272.

During it, he noted that he would love to join WWE after his MMA career is over.

“I’d love to cross over and come into the WWE,” says Covington, 34. “But I love being a UFC fighter. I love fighting; it’s my passion and what I was born and put on this earth to do. After my career with the UFC is done, WWE is something I’d love to dabble in.”

“I’m ‘Chaos.’ I’m unpredictable, so you’ll never know where I’ll end up next,” Covington says. “I feel like I’m the baddest man on the planet, so you just might see me in WWE one day.”

At the UFC 272 PPV event in Las Vegas, Covington made his entrance to Kurt Angle’s WWE theme song “Medal” and there were fans that did the “You Suck” chants.

Covington was victorious in his fight and Angle congratulated him via Twitter.

Congratulations to @ColbyCovMMA on your big win last night!! 👊🏼

Covington also praised Ronda Rousey for making the transition from MMA to wrestling.

“Ronda Rousey has really impressed me [in WWE],” Covington says. “Her promo game has come on strong. She’s just a true entertainer. She knows how to put on a show for a crowd.

“She is the baddest woman in combat sports. Look at her track record—she’s a trendsetter. The things she did in the UFC are unheard of. I’m a big fan of Ronda Rousey and I love the way she competes. I think she’s going to be the best WWE wrestler for a long time to come.”