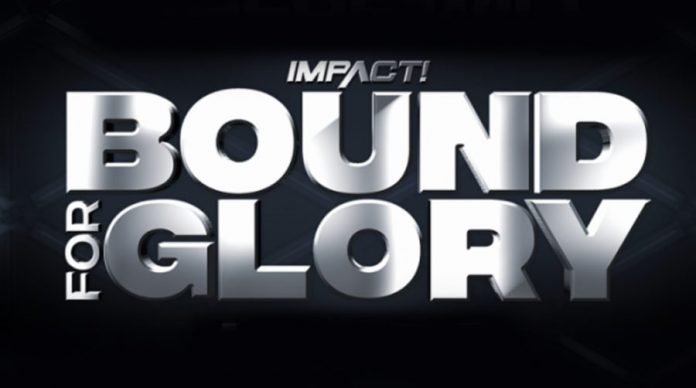 TORONTO | NEW YORK – IMPACT Wrestling, a subsidiary of Anthem Sports & Entertainment Corp., returns to pay-per-view on Sunday, Oct. 14 for its biggest event of the year Bound For Glory, presented by COMDA.com, from Melrose Ballroom in New York City, NY. The three-hour spectacular kicks off at 8:00 p.m. ET and will be distributed on cable, satellite and digital pay-per-view, including DISH, DirecTV, iN Demand, Vubiquity, Rogers, Bell, Shaw and Sasktel across North America, and streaming live globally exclusively on the FITE.tv app.

Tickets are still available at IMPACTWrestling.com for Monday, Oct. 15 and Tuesday, Oct. 16 as IMPACT Wrestling presents television tapings for its flagship weekly show IMPACT! at New York City’s Melrose Ballroom, featuring all the fallout from Bound For Glory.

In the Bound For Glory main event, IMPACT World Champion Austin Aries defends his title against Johnny Impact, who is a contestant on Season 37 of the hit CBS TV show Survivor, which premiered on Sept. 26.

Meanwhile, Impact’s wife Taya Valkyrie will make history, as she too challenges third-generation star Tessa Blanchard for the Knockouts Championship, marking the first time that newlyweds challenge for major world titles on the same night.

In other marquee matches, LAX and Konnan will end their ceasefire with The OGz and King, as the two teams go to battle in a “Concrete Jungle Death Match,” while Pentagon Jr., Fenix and Brian Cage join forces against Sami Callihan and oVe in a six-man “oVe Rules” encounter. Plus former best friends will collide when Eddie Edwards goes one-on-one with former NFL offensive lineman Moose.

For more information on how to order Bound For Glory, visit www.impactwrestling.com/boundforglory.

For more information about Bound For Glory on FITE.tv, including pricing details, visit www.FITE.tv. FITE.tv is a premium digital live streaming network that has presented over 1,000 live professional wrestling, mixed martial arts, boxing and other combat sports events since its launch in 2016. It is available online at FITE.tv, as an app on all iOS and Android devices, as well as Roku, Apple TV and Android TV boxes.

About IMPACT Wrestling
IMPACT Wrestling is one of the world’s largest wrestling entertainment properties, creating more than 200 hours of original content annually across television and other digital platforms. IMPACT Wrestling specializes in events, products, merchandise and music, as well as the management and promotion of professional wrestlers. The roster features such greats as Austin Aries, Johnny Impact, Eli Drake, Moose, Eddie Edwards, Sami Callihan, Brian Cage, Pentagon Jr., Fenix, Matt Sydal, Rich Swann, the high-flying X-Division, plus the lovely and lethal Knockouts, including Tessa Blanchard, Su Yung, Allie, Rosemary and Taya Valkyrie. Its highly successful flagship, IMPACT!, broadcasts in more than 120 countries around the world, including Thursdays at 8 p.m. ET/PT on Pop (a joint venture of CBS Corporation and Lionsgate) in the United States, Fight Network and GameTV in Canada, Sony ESPN in India, 5Spike and Fight Network in the United Kingdom, SuperSport in Africa and ranFIGHTING in Germany, Austria and Switzerland. IMPACT Wrestling also streams a 24-hour channel on Twitch.tv and is a top 10 sports video producer on YouTube with over 1.8 million subscribers, 36 million monthly views and 1.3 billion all-time views. IMPACT Wrestling launched the Global Wrestling Network (GWN) app in October 2017, showcasing over 3,000 hours of library programming and content from leading independent professional wrestling organizations around the world.