What’s next for NXT?

The black-and-gold brand filmed television tonight at their home base of Full Sail Live in Winter Park, Florida. Here are the complete spoilers.

Triple H opened the tapings by talking about Tommaso Ciampa’s neck injury and surgery. He said that the original plan was for him to announce Ciampa defending his title against Johnny Gargano for TakeOver: New York. As a result of Ciampa’s injury, a new NXT Champion will be crowned at TakeOver.

There will be a fatal five-way match tonight to determine a number one contender to face Gargano in a two-out-of-three falls match for the vacant NXT title at TakeOver.

Cole pinned Ricochet after a series of finishers were hit on everyone. The Forgotten Sons attacked Ricochet and Black after the match.

Martinez got a decisive victory.

The debuting ACH fell to Carrillo’s handstand corner rebound splash. ACH went by his real name in the match.

War Raiders called out for another team after.

A stack-up double-team powerbomb won it for the War Raiders.

Ryker got the victory with a powerbomb.

– Kairi Sane vs. Bianca Belair ended in a no contest

The Horsewomen ran in and were followed by the rest of the locker room. Io Shirai stood tall after a corner moonsault onto the pile.

Shirai held the NXT Women’s Championship and pointed at Baszler.

– Gargano and Cole took part in a face-to-face segment to build up their NXT Championship match at TakeOver.

– Aliyah & Vanessa Borne vs. Lacey Lane & Kacy Catanzaro ended in a no contest

The Horsewomen ran down and destroyed Catanzaro. Baszler choked her out.

Velveteen Dream set up shop on the stage to watch the match. Riddle got the submission victory and then declared that he would see Dream at TakeOver: New York.

Ricochet hit a 630 to win it. There was a confetti and fog celebration with the trophy in the ring after. War Raiders then made their way to the ring for a staredown. War Raiders will defend their NXT Tag Team titles against Ricochet & Black at TakeOver: New York.

After the War Raiders left, Ricochet and Black said that this would be their final appearance at Full Sail — but they will always be NXT. 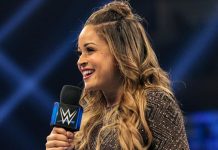 T-Bar Responds To CM Punk’s Diss On Slapjack, T-Bar And Slapjack Comment On Their Retribution Names

Miro Comments On His Decision To Sign With AEW