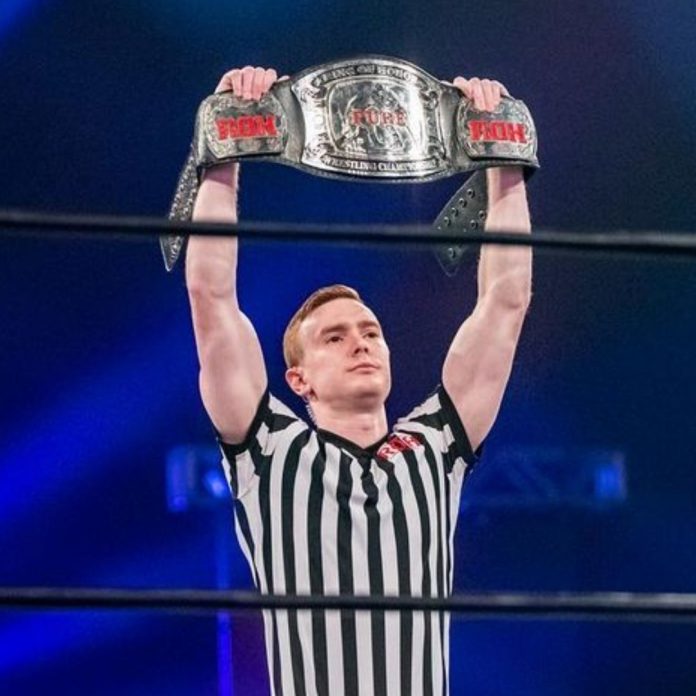 The drama and the spectacle of professional wrestling are often said to be built around moments, a specific point in time that stands out among all the chaos and colorful bravado to create something memorable in the minds of the audience. As the grappling arts reaches its crescendo, fans lean from the edge of their seats to see if a potential three-count will lead to the final bell. As much as that excitement is generated by the spirited athletes in the squared circle, those with a deep understand of sports entertainment mechanics know that a solid referee is the glue for those tense moments that signal a dramatic victory.

In truth, an official’s job is to stay outside of the viewers’ scope until the action dictates their involvement. You simply won’t notice a great referee until its time to notice their count, calls, or decisions. To say the third participant in the ring is overlooked is a true statement because that’s what the job description calls for. However, as mentioned, those that truly understand the sport know that a top-tier official allows for top talent to shine the brightest possible.

Among the glitz and the glamor usually associated with the genre, a passion and dedication develops among those that choose to pursue this unique field. Recently, at Ring Of Honor’s finale of 2020 pay-per-view, Final Battle, someone featured on the broadcast saw their own pro wrestling story go full circle.

Joe Mandak, a seven-year pro from western Pennsylvania, stood inside the ropes, holding a championship belt on display before he was set to officiate the bout. The image of the 30-year-old Mandak beamed through the television screen to an eager audience that wanted to see if Johnathan Gresham would retain the Pure Championship, a title that utilizes a traditional set of rules for a division that received rave reviews. Ironically, Mandak, a diehard fan since his youth, was hooked by the allure of the ring when he stumbled upon a stack of Coliseum Video VHS tapes, sending the mayhem through the screen, which had a profound impact on him.

“One match that sticks out was a ladder match between Bret Hart and Shawn Michaels for the Intercontinental Championship. The way Shawn and Bret sold during the match made me feel every kind of emotion even at a young age. I laughed, I yelled with anger, I yelled with excitement, and knew that is what I wanted to do. I wanted to bump and sell like Bret and Shawn did in that match so others might feel the same way I did,” Joe recalled.

A basketball player for the majority of the time he grew up, he was always athletic, but his natural metabolism kept him at no more than 125 LBS so after college when he looked into some of his area’s local pro wrestling groups, he found that even after he trained to be a wrestler in 2012, the physics of the situation just weren’t in his favor.

“It takes a toll on your body, I knew there was no way I could make a living doing this,” Mandak explained.

With a Communications degree from Penn State New Kensington, skills he didn’t know would later be useful in his path as a ref, Joe saw that the risk of injury on the dirt-stained canvases of smaller cards wasn’t something he could balance as he entered the work force outside of the realm of professional wrestling. Still, even after he hung up the boots following his brief stint as a wrestler, he attended local shows and wanted to remain a part of the industry.

Pittsburgh, an area known for its wrestling almost as much as the steel it once produced, has an extensive history of the squared circle. From Bruno battling the villains in the 60s, Kurt Angle learning his Olympic skills on the amateur mats at Mount Lebanon high school, and Mick Foley’s famous plunge at the Civic Arena, Western Pennsylvania continues to see stars emerge from the area. Part of the fabric of that is a collection of independent groups that allow many aspiring hopefuls to get their start in the industry. Mandak saw the referee stripes as a way to continue his journey in the business and sought the advice of Shawn Patrick, regarded by many as one of the best officials in Pittsburgh history with over three decades of experience.

“I talked with Shawn Patrick after a show one night and after telling him how I got started, and how I wanted to be around the business, he told me that his path to becoming a referee was similar. He showed me the ropes and walked me through some of the basics of being a good ref. Since I had trained to be a wrestler, I understood certain psychology, ring positioning, and storytelling. which helped me with becoming a better ref,” Joe explained.

“He had decided to transition from wrestling to ref training. I had a talk with him about how serious he was and his response was, ‘very serious.’ I told him that I would work with him on developing his skills and he was quick to apply all advice I gave him. I would watch his matches, offer corrections on small details, and help him round out his skill set. When to interject yourself into the match so you add to, not take away from it. The best compliment that a wrestler can give you is they didn’t even realize you were in the ring. He has taken the lessons that I provided and far surpassed anything that I have achieved. I am proud to have had a small part in Joe’s start in the crazy world we call wrestling,” Shawn Patrick added.

After two years of quite literally learning the ropes on the smaller circuit, Joe focused himself on his original goal, to land full-time work in the business, and knew he had to get in front of the ring people to make that happen so he attended a Ring Of Honor training seminar, a three-day session designed to polish and discover aspiring talent, in 2015. His awareness of the structure of matches and natural instincts as an official made an impression on the right people, and he landed a part-time gig with the organization before he was offered a full-time position more recently. However, there’s much more to his time as a full-time member of the staff than just under the bright television lights, but it’s a schedule that he fully embraced as he started a new chapter of his career.


“Pre-Covid, a typical event day would start bright and early with set up. We would unload the production and ring trucks and begin assembling the stage After everything is set up, a quick lunch break is a great way to socialize and network. The ring crew was typically made up of the ‘up and comers’ of Ring of Honor along with local independent workers who were looking to be booked on the show as security, streamer collector or even get a dark match. So, during lunch, it was nice time to get to know everyone. Once talent started arriving, I would get my assignment from senior ref, Todd Sinclair and begin dressing for that night’s event. During the event, I’m everywhere. I’m in the ring, I’m in the gorilla position, and I’m running around looking for talent who are ‘on deck.’ It’s a fast-paced environment that I love. After the show, we tear down, pack up the trucks, and go to the next city,” Mandak remarked.

Joe’s professionalism and dedication to the job hasn’t gone unnoticed by his co-workers.

“Joe Mandak has been one of the most reliable, consistent young referees I’ve ever seen. Joe does all of the little things right, he is consistent with his decisions and is not afraid to enforce the rules. Joe is frequently the first person in and last person out. He has endeared himself to the ROH roster with his work ethic and passion,” said Ian Riccaboni, lead play-by-play announcer.

Mandak cites his opportunities to officiate the Pure title matches as highlights of his ROH tenure so far, but also expressed a deep appreciation for the environment of the organization, as it helped him develop as a professional in the sport. He noted that the crew from top to bottom work together to make the shows happen, and even those with the more mundane tasks are a part of the progress of the promotion.


“Ring of Honor has been an incredible company to work for. When Covid hit, they paid everyone despite the shows being cancelled. The caliber of talent that they have is right up there with any promotion. Look at who they had in the past and where they are now. Look at who they have coming up and, in next few years, see who will be making their mark on the company,” Mandak added.

The story of Joe Mandak is a success story in many ways because it displays rather simple, but key lessons that apply to many scenarios even beyond the scope of professional wrestling. Dedication and persistence are what allowed the talented ref to land a full-time gig. His journey that status wasn’t with a pair of boots, but he stayed determined to reach his goal. A reminder of the accomplishment of that goal for Mandak is when he calls for the opening bell to start the Ring Of Honor action.