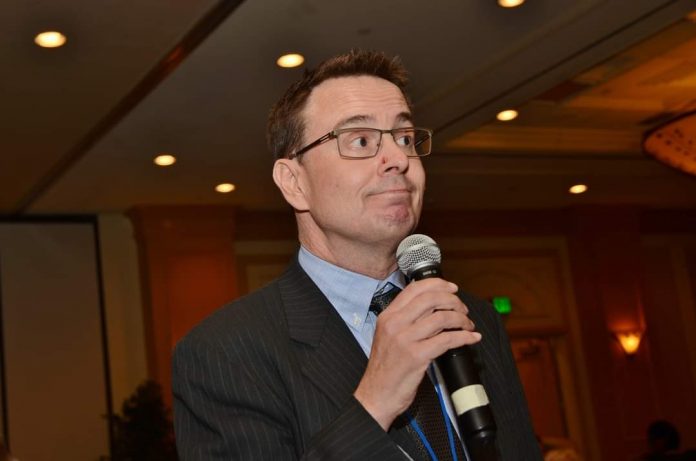 That line was received with cheers and applause in a packed ballroom last month at the Gold Coast Hotel in Las Vegas, Nevada for the 55th Cauliflower Alley Club Reunion, a gathering of many of the most respected luminaries of the industry. The CAC, a non-profit organization that provides assistance for those in need with the funds it raises through it’s reunions and memberships, honored Valley with its Courage Award.

Valley, a well-known podcast host and interviewer for The Wrestling Observer, Dave Meltzer’s longtime reporting platform that is co-anchored by Bryan Alvarez, was surprised with the CAC recognition by its president, B. Brain Blair. Talking pro wrestling on the mic in-studio, at a live card, or as far away as the Tokyo Dome is second nature to Valley so despite the unexpected award, he took the mic with confidence and appreciation at the CAC reunion.

Thank you to @CACReunion for a Courage Award. Unexpected. Thank you to @davemeltzerWON, @bryanalvarez, @Fumihikodayo, everyone associated @WONF4W and all of the wrestling fans who have supported me. I'm am so indebted to all of you. "I'm Jim Valley and I fucking love wrestling!" pic.twitter.com/1XfmpjEbTj


However, just last year Jim Valley was far away from the opportunity to address pro wrestling legends that were in the room to cheer for him, an ironic reversal of when he cheered for the sport’s stars in front of his television screen as a youngster when he watched Don Owen’s Portland Wrestling. Instead, Valley, a native of a small town outside of Seattle, was unconscious on a ventilator, clinging to life. To say the situation looked grim would be an understatement, as Valley nearly died six times during the months he spent in the hospital. His wife, Kari was a true tag team champion for him, which he cites as the reason he made it through such a unsettling period.

“It sounds brave, but I was unconscious through a lot of it. My wife, Kari is the one who saw the crash carts outside of my room. She’s the one who recognized that my numbers looked bad and alerted the doctors and nurses at least once,” Valley explained.

That bleak scene in the hospital was about as far away from an award speech as one could get.

The circumstances that put the popular podcaster there were the effects of Wegener’s Vasculitis, an autoimmune disease that causes inflammation of the blood vessels. When Valley was diagnosed with the rare condition in 2012 after coughing up blood, the disorder so under the medical radar that the nurses that initially treated him had to resort to Google searches for some reference point on the disease. He underwent a double lung biopsy as part of treatment after he was transferred to a larger medical facility in Olympia to better handle the unique scenario.

“It was supposed to take four hours. I woke up almost three weeks later. The doctor said I didn’t crash, but I clipped the tops of the trees,” Valley said.

Valley spent three months at that Olympia hospital and then several more at home to recover from the health scare. Out of the woods, Jim went on with normal life, which consisted of a love for theme parks, video games and of course, professional wrestling. His Portland Wrestlecast audio show, and Pacific Rim, the podcast based on the Japanese side of the sport that he shares with his longtime friend, Fumi Saito, an accomplished historian of Puroresu, found a home on Meltzer’s Wrestling Observer website.


After nearly eight years of no major hurdles with the disease, Wegener’s landed a cheap shot on Valley. A case of PJP pneumonia caused a flare up of the autoimmune disease, putting Saito’s co-host on the ropes. The 2020 bout with the disorder kept him in the hospital for five months, a portions of that either spent on a ventilator or with the use of other medical equipment. The scenario outside those hospital walls with the COVID shutdown was challenging for everyone, but isolated while his life was in jeopardy was one of the most difficult times for Valley. Last November, when it looked like he might be on his way home, a setback kept him in the hospital even longer, further testing his resilience.

“Hospitals are very grey, lonely places. With COVID restrictions, visitors were either limited or completely restricted. One time, I asked a nursing assistant to just hold my hand for a few minutes because I missed human contact,” Valley remarked.

Some idiot gave me all the debunked tropes about COVID & masks. This is me last year. I've been on the vent, trached and almost died 6 times. Believe me: you don't want to go through this. Worse: you don't want to put loved ones thru it. Wear your mask. It's easier than this. pic.twitter.com/5fwGol0SYb


During the darkest times in the hospital for Valley, which he doesn’t remember because he was unconscious while a ventilator, a show of love and appreciation took place outside of it. Josh Nason of The Observer took the initiative to set up a Go Fund Me to help cover the staggering medical costs that were involved with the care that ultimately saved Valley’s life. Those that have spoken with the podcaster can immediately identify his passion and positivity for professional wrestling. In many ways, Jim Valley is the wrestling buddy that many people enjoy the chance to talk shop with, and his kindness was rewarded by many inside the business. With more than a thousand donors, Fozzy front man and bubbly connoisseur, Chris Jericho supported the cause. All Elite Wrestling founder, Tony Khan, and legendary announcer Tony Schiavone were also among those that pitched in to help.

“When I woke up, I discovered we had about $65,000 raised. Just incredible, I still can’t believe it,” said Valley.

Early this year, Jim finally went home after that extensive stay in the hospital, but that was just the start of an exhausting journey back to a level of normalcy for him. He endured months of therapy and visits to specialists. The checklist of follow-up care might be longer than the 1,0004 holds that Jericho once claimed on a broadcast of Nitro. Despite progress made throughout 2021, the focus to fully restore his health continues today.

My lungs last September filled with fluid and inflammation vs. clear today. "Unbelievable!" "Incredible!" and "The highlight of my day!", according to my pulmonologist. I also vastly improved on my lung function and walking tests. #FKOR pic.twitter.com/QUeOHgEYEO


“Recovery takes a lot of work. They say it takes a week for every day in the hospital. It takes consistent work in physical therapy and every day continuing to trying to reclaim what you used to do on your own. For example, I still have shower chair in my bathroom, but I just have it there for balance. It just takes time,” Jim explained.

Tenacity and the guts to kick out define the characteristics of the babyfaces of the industry. Dusty landed the bionic elbow, Steve Austin stomped the villains, and Jim Valley refused to stay on the canvas. Too often, the professional wrestling business, similar to many other forms of entertainment, has its share of tragic stories. Thankfully, Jim Valley is a shining example of the positivity that can result from the sport, which is why he was such a perfect candidate for this year’s CAC courage award.

“I love Jim, we became friends the second we spoke together on a podcast with Fumi Saito. Passion can’t be hidden, and Jim’s knowledge speaks volumes to that passion. Jim made us all look like amateurs by dealing with an issue most of us will never have to face. He is an inspiration,” said Sam Adonis, an international star that was in attendance at the reunion to present the legendary Rey Mysterio with the Lucha Libre award.

Still humble, Valley yields most of the credit for the award and his amazing recovery.

One year ago on the trach and the vent. Having a rare autoimmune disease isn't my fault, but I still feel guilty for putting my wife through so much. That's why I see my @CACReunion Courage Award as a Tag Team Award. @TheBestTripEver is the best. pic.twitter.com/9K0yErmUYm


“I don’t consider what I’ve done courageous. I think anyone who wants to live would do what I have done. My wife is the courageous one who managed the house, paid the bills, advocated for me at hospitals, worked full-time from my ICU and took care of me when I was too weak to do it myself. I joke that when it came to wedding vows that she got worse, poorer and in sickness. She’s the courageous one. That’s why I consider it to be a tag team award,” he said.

Happy 12th anniversary to my wife Kari @TheBestTripEver. Last year I was unconscious in the hospital. This year we have a lot to celebrate. pic.twitter.com/TVebBOdCXA


The plaque with his name will remain a reminder for him to continue the classic comeback to victory as he continues diligent therapy at his home with Sherman, his loyal cat, alongside him. Wegener’s Vasculitis put Jim Valley on the mat, but through his courage, the care of Kari, and thousands of dollars raised, he answered the bell.