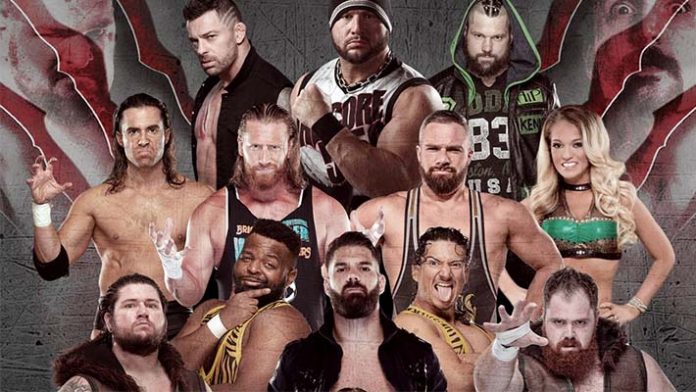 On Saturday, September 17th in Melville, NY, Create A Pro Wrestling ran their big show, Wildlife. The card was headlined by “Platinum” Max Caster taking on Ace Austin in the main event. The show also saw a tag-team dream match between AEW and Create A Pro’s own, Iron Savages, take on The Wolves. Here are the results and a review of the show.

This match was a lot of fun. The match showcased a lot of the newer talent Create A Pro Wrestling has to offer. It was a fun battle royal and there was a lot of potential in that ring. Some of the guys in the match were Nick Robles, Percy Ryan, “The Sweeper” Eddie Prevete, TK Wylde, Pat Fitzpatrick, Scotty Karate, and more.

After the match, Johnny Clash came out to celebrate with Prevete as he now found his new tag team partner. This was it for the pre-show as the main card was about to kick off in a big way.

Ariela Nyx talked Myers into signing a contract saying if he lost, she would become the new GM of Create A Pro. The match was great. It was a hot way to kick off an already stacked show, and it featured a lot of hard-hitting spots. Thanks to some help from Ariela Nyx, Vargas was able to take down Brian Myers in the place that Myers built.

If you haven’t heard the news, it’s official! I am the new GM of @CreateAPro ! I told you all that @Vargasdestroyer and I would take over! #TheAnswerToYourPrayers #Wrestling pic.twitter.com/u5xM3jPIX5

This match was also a ton of fun. It featured three of the most talented women on the independent scene today. Alisha, Davienne, and Ava Everett are based out of Chaotic Wrestling in the New England area, which is another hot spot for professional wrestling. Chaotic has produced a lot of stars that we see on our television today, and these three women are no different.

Alisha Edwards would go on to pick up the win after a hard-fought match. The fans were behind Alisha and were very happy to see her win. Ava Everett and Davienne had a fantastic showing as well, as they truly showcased their talents in a Create A Pro Wrestling ring.

This match was another good match. Evil Kip would go on to retain his Mayhem Medal when he was able to capitalize on an opportunity thanks to TJ Crawford. Crawford would hit his finishing move onto JGeorge and would attempt to go for the win.

However, before Crawford was able to do anything, Evil Kip took him out and pinned JGeorge himself to retain his Mayhem Medal. Kip had great ring awareness to be able to get this done and was able to ultimately pick up the victory because of it.

Match 4: Better Call Slade (Mark Sterling and Slade) retained their Create A Pro Tag Team Champions over the Even Stevens

This match was a very fun one. It featured the Create A Pro Tag Team Champions on the line as Better Call Slade members, Mark Sterling, and Slade defended them against the Even Stevens. The match itself saw a lot of funny moments from the Stevens both not wanting to get in the ring with Slade.

Who could blame them? Slade is a madman after all. Stephen Azure got in the match however and got in the face of Slade and took the fight to him, to no avail. The match ultimately saw Better Call Slade retaining their Create A Pro Tag Team Championships over the Even Stevens in a great match.

Thank you to everyone who came out and supported the #VestInTheWorld

This match could have very well been one of the underrated matches of the night. Four truly incredible wrestlers were featured in this match, as well as some of the best that Create A Pro has to offer. Ariela Nyx came out at the beginning of the match to say that unfortunately she got off the phone with Tony Kahn and the two couldn’t come to an agreement for Alex Reynolds to defend his CAP TV Championship, so she stripped him of it.

Bobby Orlando would make his way out to the ring and announce that he was the fourth and final competitor in this match. The fans went nuts and were firmly behind Bobby Orlando. Ultimately, Orlando would win the CAP TV Championship in an incredible four-way match.

This match was truly a ton of fun. Bully Ray was one of the special attraction guests and to see him in the match truly made it that much more entertaining as well. Jack Tomlinson accompanied his fellow “Larger Than Life” members, Eric James, and Dante Drago out to the ring and would be their manager for the match.

Ultimately, Bully Ray, Phil Cardigan, and “Dr. Cool” Jay Klang would pick up the victory here. At the end of the match, there was a funny moment where Phil Cardigan and Jay Klan would take out a door that says “F**k Cardona” on it. Bully Ray would use this door to throw VSK through and pick up the victory that way. After the match, Bully Ray gave a speech about how good it felt to wrestle for Create A Pro Wrestling in his hometown of Melville, NY.

This match was the first match back from intermission and featured some great tag team wrestling. “The Sweeper” Eddie Prevete won the right to be Johnny Clash’s partner by winning the battle royal on the pre-show.

The match ultimately saw Leo Sparrow and GKM, “Birds of the Sun,” win the match when they beat Eddie Prevete. The main story coming out of this match however is Johnny Clash would turn his back on Prevete when Prevete tried to tag him in. Clash would celebrate with the “Birds of the Sun” and indicated that he may be starting his own faction on Create A Pro.

This match was about as good as it gets. Both men had an excellent showing in this match. Price got booed out of the building and played it off like a natural-born heel. Price is truly one of the greats on the independent scene right now, and gives off a lot of early MJF vibes.

Bryce Donovan would ultimately go on to defeat Alec Price to retain his CAP Championship. Bryce Donovan continues to show why he is as good as he says he is with victories over the likes of Alec Price. Donovan will hold that Create A Pro Championship for a long time, and rightfully so.

The Iron Savages (fka Bear Country) have been making a name for themselves on AEW. Bronson and Boulder are two mountains of men and can take the fight to truly anyone they get in the ring with, last night was no exception. Ultimately, the Iron Savages defeated The Wolves on Saturday. The two teams embraced after the hard-fought match and signs of respect were shown. It was awesome to be there to see this live.

We’ve worked harder than ever to transform into the best version of Bronson & Boulder – to not just “hang” with the best tag-teams in the world, but dominate to prove that IRON SAVAGES will soon belong to that list of names forever

The Wolves were the ultimate test. Thank you 🐺 pic.twitter.com/I31CcutbQW

This match was probably one of the best on the show. “Platinum” Max Caster came home to Create A Pro Wrestling on Saturday night as he took on Ace Austin. Max Caster hit a freestyle on Ace Austin that the fans enjoyed a ton where he dissed Impact Wrestling and the Bullet Club.

When the match began, fans watched in awe as these are two of the top wrestlers around today. The things Ace Austin can do in the ring are incredible and he deserves a lot more credit than he gets. Ultimately, Max Caster would go on to defeat Ace Austin with a mic-drop in a very hard-fought match.

Overall, Create A Pro Wrestling didn’t disappoint and it really never does. Create A Pro wrestling on Long Island, NY is a big destination for professional wrestling. Stay tuned to Create A Pro’s Facebook, Twitter, and Instagram for the upcoming show and match announcements, and follow their Twitch to see the shows from anywhere.