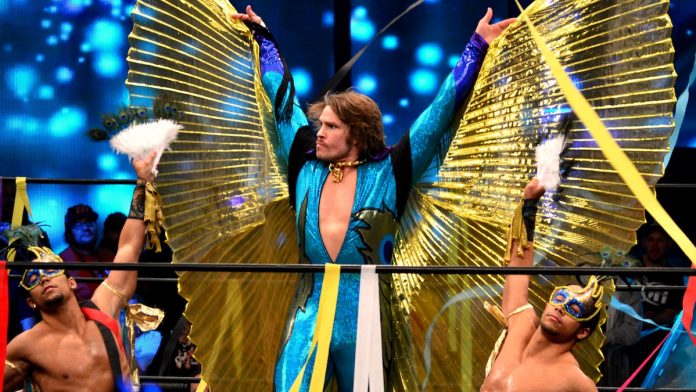 Dalton Castle recently spoke with Alison Rosen for an interview on her “Is Your New Best Friend” podcast.

During the discussion, the former ROH Champion who challenges Chris Jericho for the title on tonight’s AEW Dynamite, shared a story about a past match at a “Stop The Violence” show.

On getting into pro-wrestling: “I was 16, I used to travel, I wasn’t yet trying to be a pro wrestler, but my friends were all pro wrestlers. It wasn’t Rome, New York, but it was close to it. They didn’t have a referee and they were like, ‘this guy can do it. He’s here.’ They gave me a striped shirt, it was in a school gymnasium. There were maybe 40 to 50 people, spread out, so it was cavernous. I had to ref a hardcore match, it was the middle of the show, three or four on the card.”

On how the match he officiated was at an event called “Stop The Violence,” and how a woman asked for the match to be stopped because it was going against the cause: “There were these two dudes wailing each other with light tubes and chairs and bleeding everywhere in this empty gymnasium. I hear this blood-curdling scream from the hallway that said, ‘STOP THE MATCH!’ I look over and there is this woman who is the curator of the event who was screaming and bawling, she was crying so hard to stop the match because the name of the show was a charity event for a place called Stop The Violence and no one had told her this match was going to take place. I just shrugged my shoulders and rang the bell.”

Check out the complete interview at AlisonRosen.com. H/T to Fightful.com.