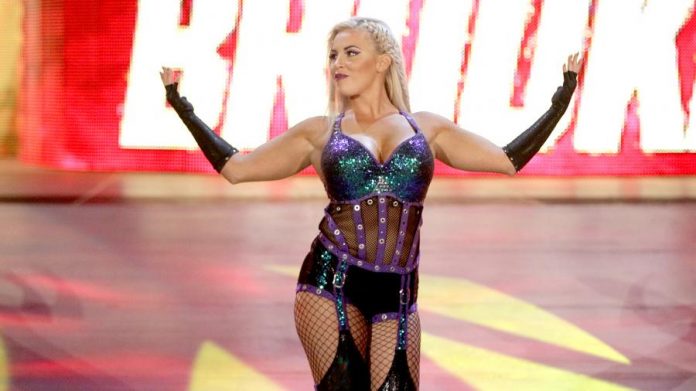 – Above is video of Nikki Bella and Artem Chigvintsev dancing the Tango to Pink’s “So What” on the season 25 premiere of ABC’s Dancing With The Stars last night, including Nikki performing a wrestling move on her partner at the end. They received a 20 out of 30 score for the routine. As noted, online voting is open until 8pm EST tonight. There will be an elimination on next Monday’s Ballroom Night episode, and another elimination on next Tuesday’s Latin Night episode. Each fan is able to vote 13 times per episode.

– As noted, Cesaro & Sheamus defeated Luke Gallows & Karl Anderson and RAW Tag Team Champions Seth Rollins & Dean Ambrose in a non-title Triple Threat on last night’s WWE RAW. The two will face Rollins & Ambrose with the titles on the line at WWE No Mercy this Sunday. Cesaro tweeted the following on getting the titles back at No Mercy:

– Dana Brooke and Summer Rae were among the wrestling stars at the Mr. Olympia event in Las Vegas this past weekend. WWE announced the following on Dana winning the Female Image Award:

Dana Brooke took home the Female Image Award at the Mr. Olympia ceremony this past weekend, earning the WWE Superstar one of the highest honors the prestigious fitness organization can bestow.

Presented by Mr. Olympia promoter Robin Chang, International Federation of Bodybuilding and Fitness (IFBB) president Jim Manion and “Voice of Bodybuilding” Bob Cicherillo, the award designates a female athlete who best represents the IFBB and National Physique Committee (NPC) by giving back to outside organizations and inspiring individuals within the community. In addition to performing as a WWE Superstar, Dana is also a fitness competitor who participated in the 2017 Arnold Classic.

WWE.com congratulates Dana on her outstanding achievement. Take a look at Dana’s Instagram post highlighting the trophy and the presentation ceremony.

??❤️What an amazing Honor to accept this award!! I'm so proud but humbled to represent the #ifbb & #npc !! This amazing organization in itself has brought so many wonderful things into my life- @wwe , supporting endless charities, starting my own foundation, meeting my beautiful Angel @dallasmccarver & so many other things!!! DONT BE COMPLACENT ! Strive for every goal, do what makes you happy, give back to charities, & most importantly support the organization you are in!! Thank you @mrolympiallc & @npcnewsonlineofficialpage @ifbbprobobchick @aroundthenpc_jm @jmmanion for recognizing this!! I will continue on and forever! #wwe #raw #support #giveback #doitfordallas #olympia #mrolympia #lovewhatyoudo