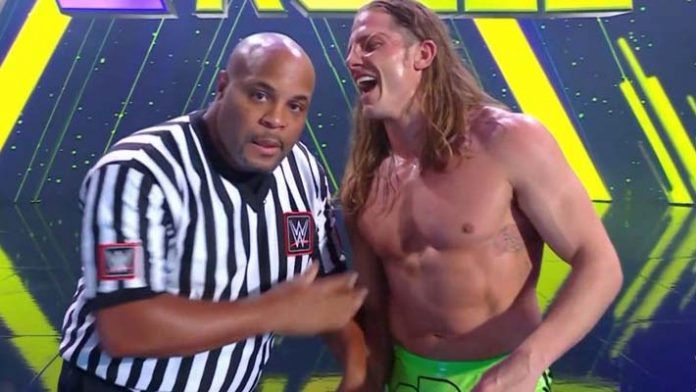 During the discussion, Cormier also talked about his experience at Extreme Rules.

Cormier said, “I was in the back and I was nervous because obviously, you know the outcome. I started forgetting the match. I was like, oh my goodness. So I kept having to ask questions. I was so nervous, bro. But once I walked out there, it was so fun. The energy of the crowd is like second to none. I fought in front of bigger crowds than I was in front of last weekend, but ultimately that’s just, it’s a shoot. I’m going to just fight. It is gonna be what it’s gonna be, but to remember all the points of what you’re supposed to do in the match, dude, it was amazing. Then I got fans heckling me. They’re calling me Carl Winslow in there. They’re messing with me. They said, ‘DC, climb up the cage.’ I’m standing in the bottom like, I’m not going up there with these dudes. They’re up there actually wrestling on that little ledge bro. I was like, this is crazy. Then when Riddle jumped off the top, I was like man, I couldn’t believe that I was actually in that moment. I don’t know how much you pay attention, but then Bray Wyatt returned right after so we were like the closer to a massive moment, but my favorite part was I got to essentially be Herb Dean.”

He also commented on if he will be doing more in WWE, “I came home and my partner in my barbershop was at my house. He was like, ‘Man, you look a lot bigger on TV.’ I was like, ‘The TV adds a few pounds and the stripes didn’t help’, but that vision is why I’m gonna lose weight. That visual is why your boy is going to lose weight. So they’re talking to me about doing future things in WWE and I go, I will do things but I gotta get in shape first. Give your boy some time to get some of this baggage off this luggage.”