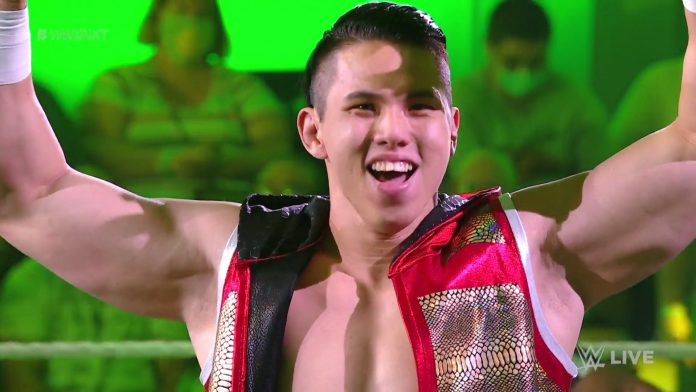 Dante Chen recently appeared as a guest on the Kick to the Gut podcast for an in-depth interview.

During the discussion, the NXT Superstar spoke about his favorite era of WWE, as well as really enjoying the work of The Miz.

On his dream match being a bout against whoever the WWE world champion is: “Honestly, the only dream match that I have in mind is whoever the champion is at the time. To be very honest. I have favorite WWE Superstars. I have favorite wrestlers in mind. But I’ve never thought about stepping into a ring across from them before. Like, it all depends on the stakes of the match for me, that will be what makes a dream match for me.”

On the 2010 era of WWE was what really got him into wrestling: “I really only thought of one era where I watched the most, what really got me into it. That would be the 2010 era of WWE… That wouldn’t be necessarily when I think I would’ve thrived, but it’s just the era that I feel like I was the most engrossed with WWE that era was when I re-ignited my interest for wrestling.”

On how The Miz might be one of his dream opponents: “[Apollo] recently made his return. So Apollo Crews is definitely up there, but someone else would be someone that I actually enjoyed watching as a kid. It would be The Miz. I was kind of awestruck to see him there at the performance center. So, that was cool to see him. I really enjoyed his work, again, back in the 2010 era, when he was Mr. Money in the Bank and when he cashed in and became WWE Champion, he was someone that I looked up to as well. So, The Miz might be up there as well.”

Check out the complete interview via the YouTube player embedded below. H/T to Fightful.