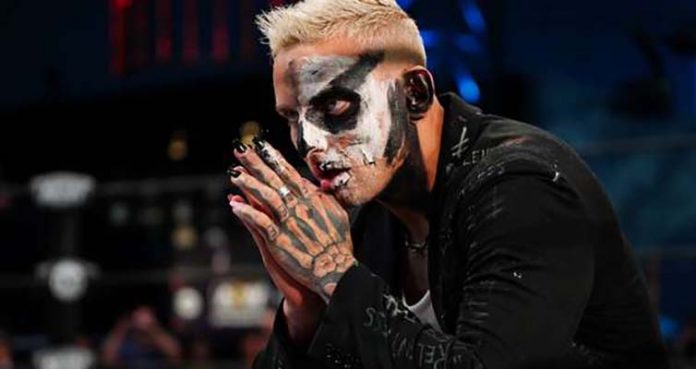 Darby Allin would easily be the Hardcore Champion in AEW if that belt existed. Wait, should it? I’m not sure… There are pros and cons to having a Hardcore type title in AEW. They would probably need to name it something else too!

Darby was immediately loved by fans ever since he debuted in AEW back in 2019. His first match was against none other than, The American Nightmare himself, Cody Rhodes. This match took place at Fyter Fest and ended in a timed draw.

Since then, Darby has been super popular with the fans. He was also the longest-reigning TNT Champion to date. He held that title for 186 days before losing it to Miro on Dynamite.

Darby paints half of his face white, like a skeleton, to signify that he is already half dead. This is derived from a car accident that occurred where his uncle passed away, but Darby survived. There are always several fans in attendance who paint their faces the same way he does.

Darby is an outstanding professional wrestler. His speed and size remind me of Rey Mysterio in a way. While the risks he takes definitely remind me of a younger Jeff Hardy. Back when Jeff was doing Swanton Bombs off of stadium entrances. Do you remember that!

Jeff and Darby just had a great match last week on Wednesday night, Dynamite. Darby even hit his own Swanton Bomb onto Jeff off a 20ft ladder located inside the ring! The landing looked rough. It was onto several chairs, set up like a bed, outside of the ring. Seriously! Talk about a high-flying risk-taker.

If you haven’t seen this match, I would absolutely recommend going back and watching it. The match was very entertaining and exciting from bell to bell.

Darby isn’t the largest wrestler, but he absolutely makes up for what he lacks in size in grit and fearlessness. He does some crazy stuff, as I described earlier! His finishing move is the Coffin Drop. And yes, it is performed just as it sounds. Basically, Darby will jump backward off of the top turnbuckle or higher points at times and drop onto his back on top of his opponent. Now that sounds pretty painful for both parties involved!

I would love to see Darby mix it up in the tag team division. Let’s keep Sting doing what he’s doing, being the living legend in the background. Sting will back Darby up and get involved from time to time. He has cleared the ring and mixed it up several times. It is always awesome to see Sting get some shots in.

But maybe Darby could get another tag partner? A trio? A new faction? The Misfits?? There is so much that you could do there.

Regardless of Darby’s direction, big things are definitely in store for him. He is super popular with fans, he is creative, and he is authentic. If you haven’t been following him, it’s definitely worth checking out some of his matches. I would start with the Jeff Hardy match and go from there!