Just like to say before I start with this weeks topic that I just watched NXT for the first time tonight since it has been filmed at the new arena and I have to say I was very impressed with the whole show. The whole set out of it seems very good, the matches were great and the commentary was second to none. Think I’m going to have to check out a bit more of it to be honest.

This week though I’m going to talk about the whole Ryback and CM Punk situation.

First off with this I would like to say that I am excited for this match. I know we never truly know what is going to happen in WWE matches going in, but with this one I can’t even fathom to guess. I definitely feel that CM Punk shouldn’t lose the title to Ryback, but I also feel that Ryback should not get beaten by CM Punk or anyone for that matter as of yet. This makes for very interesting watching as I am hoping that the WWE are having the exact same train of thought as I am.

Now a few months ago if you keep up with my columns, I will openly admit that I was not very happy with the direction they were going with Ryback as I felt that they spent far too much time with him beating jobbers over and over. Beating jobbers for a few weeks is fine before moving onto a feud or at least on to beating guys that are on the roster, however WWE spent months on end having him fight jobbers which I felt was completely unnecessary. I wish they had just spent a little more time on feuds with him before they pushed him into the main event, because the only feud he has really had has been one with Jinder Mahal, which wasn’t exactly a marquee feud.

We all know though that CM Punk can perform with the best and the worst wrestlers on the rosters, Ryback though we haven’t really got to see more than a few minutes at a time really. I know he has been in WWE development system for years before he got called up and he has performed as Skip Sheffield on Raw previously (which I can’t really remember any matches he had to be completely hoest), so it will be interesting to see how he fairs in a match which I’m assuming will be quite a bit longer. I have no doubts that he will be able to perform because it isn’t as if he is a rookie but it will be good to see at what level he can perform in the main event.

That is me for this week guys!

See you all next week! 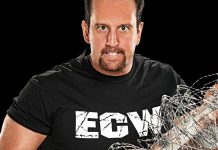 Looking At The Briscoes, Gargano, & Lethal