In part two of a two part interview, one half of TNA Impact Wrestling’s The Wolves, Davey Richards recently took some time to participate in an exclusive interview with PWMania.com. Richards discusses his time with ROH, NJPW and his and Eddie Edwards tryout match for the WWE. Check out part one of the interview here and part two below

When you first came into ROH you were dubbed Kenta’s protégé. Share your thoughts on the experience and subsequent relationship that ensued the man now known as Hideo Itami?

We really didn’t develop a relationship. He would be in and out from Japan and it was something that I really was grateful for. Gabe Sapolsky who was a booker at that time and he was good at recognizing talent. Or recognizing or something special that this person has that will bring them along or what anyone did. He was one of the greatest bookers I ever worked for or one of the greatest bookers period in wrestling. It was a really huge step for me. Kenta was just a God at that point in wrestling and for me to be his protégé was just oh man, this company has faith in me and this guy has faith in me and I have to have faith in me so it really helped my self-esteem. I think Gabe was good at that. At finding ways to inspire guys like Paul Heyman was no matter what it was. It was something I will never forget and something and once again something I’m eternally grateful for.

Discuss your time as part of the No Remorse Corps and the irony of feuding with Aries once again all these years later?

That was my first faction. The real first identity and it was something where I really started coming into my own in wrestling and we had a ton of fun. We had so much fun between Roderick Strong, Rocky Romero are so great and we got to feud with guys like Austin Aries and I was learning a lot from him then and enjoyed wrestling then and I’m learning a lot from him now and still enjoy wrestling him now. To this day and he’s a great wrestler and a really smart business mind and he’s always been successful and I’d like to be every bit and moreso as successful as him. He is definitely an inspiration.

As part of ROH, yourself and Eddie Edwards captured the ROH tag team titles on multiple occasions. Describe your experience with the promotion and what you felt you’ve walked away from them with any specific knowledge and memories.

It was a great experience. It was my home for many years and I’m very proud of all the time I’ve spent there and I’m very proud that its continued to grow and I wouldn’t be where I am or the person I am today without them. The thing I was most proud of doing there was The American Wolves by far and away. If not for them we couldn’t be what we are today. I gave them a little bit back of what they gave me. It’s always a place that stood for the highest quality of in ring action and I think they live up to that. There are phenomenal talents that are there and guys that have moved on from TNA which just goes to show you that things are circular and that good talent is always going to find a home somewhere. Ring of Honor talent is doing well in WWE. Ring of Honor talent is doing well in TNA and Ring of Honor talent is doing well in Ring of Honor. It’s that talent that helps out the grand scheme of wrestling. It’s a very good basis and a place for a lot of people. Gabe’s eye for talent absolutely has something to do with it. If you look at it, Gabe gave Kevin Owens a job, me a job, Austin Aries a job, Tyler Black/Seth Rollins a job. I’m forgetting countless others don’t get me wrong Samoa Joe, Bryan Danielson/Daniel Bryan a lot of those guys wouldn’t have been if Gabe hadn’t given them a shot. He definitely was and still is by far ahead of his time. He’s a very great and talented person.

Was there any match during your time there that stood out, either singles or Tag Team?

I really liked my matches with (Tetsuya) Bushi from Super Juniors in New Japan and then Ring of Honor I would have to say that 45 minute match between me and Eddie (Edwards), Bryan Danielson, Tyler Black as well it was in Canada I remember that was a really big one and I don’t really remember my world title wins because I was knocked out for most of it. I’m sure that was swell too. That match and then my matches with Bushi were just two of my matches I just remember having a lot of really fond memories and having a lot of fun in those.

Discuss your time in NJPW & what stood out from your time there?

It was a great experience. It was absolutely phenomenal. I was pretty much there full time for over two years. That was always the one company in Japan that I wanted to work for. I always wanted to be in the Super Juniors and I did that and wrestle in the Tokyo Dome and I did that. It was great and it really helped me to understand how a big company like that works. I always did the independents so it was a phenomenal thing and I learned a lot from those guys and I still carried a lot of what I learned there and work ethic and the professionalism that they embedded in me there carried it on to now. It approaches my style a lot to where wrestling is first and foremost as a sport and a time that I hold very near and dear to me.

For fans that may not have seen, both you and Eddie had a tryout with the WWE under the NXT brand under the American Pit bull name. Why didn’t it turn into something more?

We couldn’t commit to going down there and going into their system. I can’t go down there and train 5 days a week at NXT because I’m in school, I’m in medical school full-time. It is very important for me to get my doctorate and I’m also a full time firefighter/paramedic and that’s something that’s very near and dear to me to. For me, I operate best just in life just to being having Davey time, wrestling time, and then coming home and having Wes time. I love wrestling, I also love saving people’s lives and helping and medicine and things like that. So I don’t love one more thing than another so for me it’s just doesn’t work out for me to go 100% into wrestling and that’s just my personal thing. They were very kind to us. They were very generous. They were very fair and nothing to absolutely have to say to them. They were absolutely great people. They are obviously doing great so were all very happy for them. It’s just didn’t work for me personally. Pursuing my doctorate is kicking my butt, so I have a full time job and I wrestle full time and I go to school full time so for me to give up all of that just to go to NXT wouldn’t work out. I have to concentrate on that. They had some names and I said well could I be something Billington because well Tommy Billington is The Dynamite Kid, my number one inspiration in wrestling. They were cool with it and it was all good.

How did TNA happen to come about & how have you found the experience with the promotion?

We were talking to TNA pretty much the whole time and I really wanted to go to TNA from the start and Eddie really wanted to give NXT a chance and check it out and I can understand. So we went down and TNA was really cool about it. They totally understood. We go and do our thing with NXT and TNA came to us with the deals and said hey we’ve got something for you and can get you guys started right away on TV. As soon as we cleared up things with NXT we told them we weren’t going to go any further and they said they weren’t willing to go any further and we had a contract with TNA within 5 minutes.

Do you foresee the potential of an onscreen storyline developing between you & Angelina much like that of Mickie James & Magnus?

It seems like definitely it worked out like that’s where we are heading in a storyline with her. I can learn a lot so it will be good for me and fun for her so were all for it. Whatever works and whatever makes sense if it ever makes sense but we will definitely do something like that.

What does the rest of 2015 and beyond hold for The Wolves and Davey Richards on his own?

My twitter is @RichardsWesley and there is a link to my Facebook that I’m on as much as I can be and it’s Wesley Richards which is my real name. Also our merchandise for TNA who we have always had a hand in designing our own t-shirts that you need to have. We really like them a lot. Some of them are really great. Some t-shirts are kind of lame but I really like ours and you can go on to TNAshopzone.com and get ours and getting on the website and click on those. I’m really proud of those and then I have my own t-shirts that you can look on my Twitter and on my Facebook you can look for them and I can autograph those and send them out. So those are my main social media outlets. I’m on Instagram but really I’m on it so infrequently that you’ll probably get something on there from like 1974 from me on there so it’s probably not worth going on there. 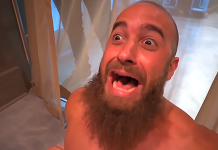 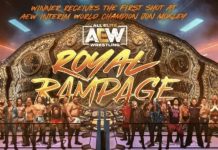