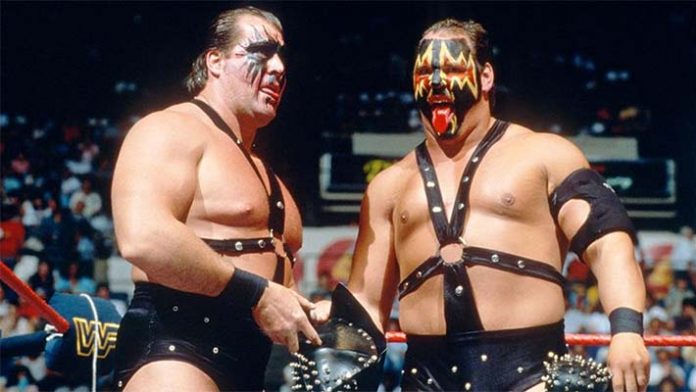 In PWMania.com’s ongoing coverage of The Last Match musical, I had the chance to ask a few questions to some of the legends of professional wrestling that are attached to the project as the Legends Producer Circle! First on the list is one-half of one of the most infamous tag teams of my childhood, the legendary AX of DEMOLITION! Ax and partner Smash held the WWF World Tag Team Titles three times over their career for a record number of combined days reigning as champs!

If you haven’t already, make sure to check out my original article on the upcoming Rock wrestling musical.

If you were to introduce a brand new, fresh-faced wrestling fan to your finest work, what match, segment, or sequence of events would you point them to?

“I would suggest they look at one of our tag matches against the Hart Foundation or the British Bulldogs. We also had a set of great matches with Strike Force.”

How did you get involved with The Last Match? What were your initial thoughts when presented with the opportunity to be a part of a Pro Wrestling Rock Musical?

“We (Demolition) were approached by a good friend Tommy Fierro, 80’s Wrestling Con. I was excited and intrigued to be asked. Seems like it will do very well.”

Outside of The Last Match, do you have any other upcoming projects or appearances you are involved in?

“As Demolition, we go out to fan-signing events at least two times per month. It has been fun meeting the fans and interacting with them. We hope we will be able to continue doing that.”

Is there anything (a moment, a period of time, a relationship, etc.) that you wish you could change from your professional wrestling career? Maybe something that you wish had gone a different way, for better or worse?

“As for my experiences in professional wrestling, I would do it all again. The only thing I would attempt to change would be to try to take members of my family to more locations to experience what I was able to see.”

What are you most excited about being a part of The Last Match? Do you see any of yourself in the show’s protagonist, Ben Vengeance, or any of the other characters?

“I am looking forward to seeing the production and witnessing the fans’ reception. I can understand the wrestler “Ben Vengeance” facing the end of his career and wanting to go out on good vibes. We all must face Father Time when it is time to move on. The window is only open for a brief amount of time. Enjoy it while you can.”

What was your reaction to Vince McMahon’s WWE retirement and your experiences with him?

“Yes, we worked for some time for Vince. He made a tremendous impact on professional wrestling. I was surprised by his retirement but also I understand that he may wish to step aside and let his family take charge. He was a great business man that developed many positive changes for wrestling. I am sure he will miss it.”

More information on “The Last Match: A Pro-Wrestling Rock Musical” is available at TheLastMatchMusical.com and Instagram @thelastmatchmusical.

The next single is scheduled to be released soon. You can listen to The Last Match’s first official track by Ramin Karimloo, Thirty Years, below: