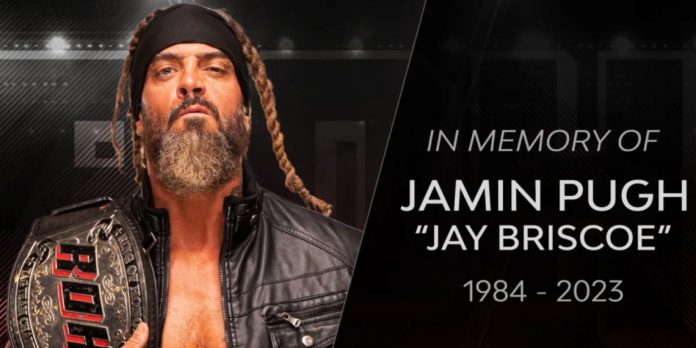 Today would have been Jay Briscoe’s 39th birthday, but he died last Tuesday at the age of 38 in a tragic car accident near his home in Laurel, Delaware.

Briscoe will be remembered with a candlelight vigil tonight at 7 p.m. at the Lee Elliott Worship Center on Phillips Hill Road in Laurel.

Briscoe’s funeral will take place on Sunday, January 29 at the Laurel High School gym on Central Avenue. Visitation will take place from noon to 1pm, followed by the service at 1pm. Reverend Tim Dukes will preside. The family will then hold a private interment.

The Hannigan, Short, Disharoon Funeral Home in Laurel is in charge of the arrangements. By visiting the funeral home website, you can leave a message on the online tribute wall or plant a tree in Jay’s memory.

We previously mentioned that the driver of the truck that hit Jay’s truck, 27-year-old Lillyanne Ternahan, also died. In lieu of flowers, the Briscoe family requests that donations be made in his honor to the two Ternahan children to help with their college fund. Josh Wharton, a family friend who organized the GiveSendGo for Briscoe’s family, has started a fund to assist the Ternahan family with their college fund. This campaign can be found by clicking here. As of this writing, the fund had received 124 donations and had raised $22,405 of its $20,000 goal. Many of the donations are personal, but AEW’s Britt Baker has made a $500 donation.

“In lieu of flowers, Jamin would want you all to donate in his honor to the Ternahan children to help with their college fund,” Jay’s family said in a temporary obituary distributed to local news outlets.