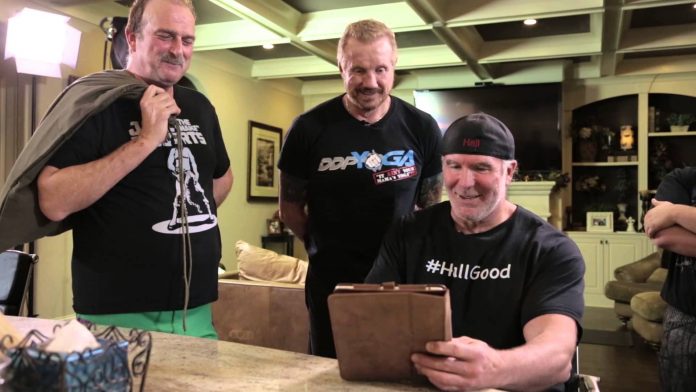 My name is Donald Wood from Ring Rust Radio and Bleacher Report. We had WWE Hall of Famer Diamond Dallas Page on the show this week, and it was a great episode with plenty of exclusive content.

Ring Rust Radio: While you have already helped so many people with DDP Yoga, the DDP YOGA NOW app is making it easier than ever for people to keep up with their workouts and nutrition. What was your ultimate goal with the release of the fitness tool?

Diamond Dallas Page: We have been working on the app for years and we are finally at the spot where we can promote it and let people know about it. A lot of people still invest in our DVDs, but eventually just like the 8-track and VHS, they are going to be gone. I have been preparing for that day with the DDP Yoga app. The app really has every workout I have ever done plus all the new workouts just for the app. They range from kids workouts, beginner, intermediate, and advanced. We also have the new DDPY Rebuild and that’s really for people 55+ or people with limited mobility. If you have problems getting out of bed, or you are chair bound, I have workouts for that to help you out. So we now have workouts from kids to older adults to athletes and even veteran athletes. I have been doing a lot of work with NFL legends lately and getting them into DDP Yoga. People ask about my diet and how to eat clean along with the diet, so I have included recipes now on the DDP app. Breakfast, lunch, dinners, salads, even sweets, they are all on there with videos on how to prep them. My inspirational stuff is also loaded on the app. With the DDP TV on the app, it’s your way to stay connected and stay inspired to put the work in and see the results with tracking abilities on the app. You have to feed your brain and your mindset the same way you feed your body. Whether it’s through nutrition or working out you got to do it. Every Monday I’ve got a different motivational Monday and I share it with everyone so they can turn it around and own it. It’s all about the story you tell yourself. I just wrote a book, it’s not out yet but you can pre-order it on Amazon. It’s called, “Own Your Life” and the opening paragraph starts off with the concept of what would you do if you knew you couldn’t fail? I have lived every single dream I have ever had. I break it down throughout my book Own Your Life through my stories and recalling everything from wrestling, to recovery, and creating DDP Yoga.

Ring Rust Radio: We’ve seen the inspirational videos and testimonials from other wrestlers about DDP Yoga, but I’m curious if you have a certain exercise from the overall routine that you enjoy doing the most or perhaps one that you think is underrated or overlooked.

Diamond Dallas Page: It’s so funny, because a million people have seen the video of the disabled veteran I helped. I was able to get Jake to do it, then Jericho to do it, then AJ started doing it, almost like a domino effect from that video. I would say two biggest influencers in the success of DDP Yoga is Arthur Boorman. We put that video up and it was from five years ago at that time. Anybody that invested in my first program, there was no food plan, no inspiration, we didn’t have all these amazing communities online like Team DDP Yoga, or our Facebook page. It was just me and every single person that invested in the program I sent them an email and I would tell them that I am not trying to sell you anything. You already bought the program and I am just sending you this email as a thank you for believing in what I am trying to do. I sent them five questions and people would write me back saying this isn’t really DDP emailing me. I was cutting and copying and sending each one of these emails out myself. This guy Arthur gave me some amazing feedback. So I wrote him back and told him thank you so much for taking the time to do that. I said it sounds like you may need some help and to tell me a little about himself. Well, he wrote back and his cliff notes were: disabled vet, morbidly obese, I’ve relegated to thinking of myself as a piece of furniture. I asked him to send me some pictures so I could see what I am working with. His pictures showed me his knee braces that were attached to his back brace that takes his wife 20 minutes to put on him every single morning as she helps him out of bed and gives him his wrap around canes to hobble to the bathroom. He was 5’6 and 297 pounds. I’m looking at his canes and trying to think of a way to help him out. I sent him one of the food plans I got from a guy named Dr. Fred Bisci. I knew this case was all about health. He sent me back an email saying he thinks he can do it and he will give it a try. I sent him back an email saying awesome and keep me posting, but he didn’t do that. He said, “I can do it” and then I told him to send me his phone number. He was the first guy I ever talked to about the program that I didn’t know. I talked to him, we had a great talk, and two weeks later he called me back to say he lost 20 pounds and 4 inches off his stomach. Now it wasn’t a “real” 4 four inches because he was bloated from eating foods that inflamed his stomach. Once he got off of those, his stomach went down around an inch off his stomach from the first two weeks. All he wanted to lose was 50 pounds so the VA would operate on his knees from botched surgeries. The first month he lost 32 pounds, the next month he lost 22 pounds, the following month was 18 pounds, and that’s 72 pounds in three months. He would go on to lose 140 pounds in ten months. He lost the knee brace, the back brace, the wraparound canes, and now we was able to run. More importantly, he didn’t need to get those knee surgeries after losing weight. This is when I started to learn that the food you put in your body can either heal you or f–k you. Back about 25 years ago, you never saw guys or athletes around 300 pounds that were built like the Fridge William Perry from the Chicago Bears. Today, you look around and you see people easily at 400 pounds walking around. You can even find 5, 6, or 7 hundred pounders around me too. I really suggest movies like Food Inc. and Genetic Roulette. Just to get the education so you know. The last 20 years, obesity, heart disease, cancer, diabetes, autism, have all blown through the roof. The main thing that has changed is the food. The pesticides on the food and the genetic modifications to the food. I am 61 years young, and with my training, diet, and conditioning, I can keep up and beat kids training Temple University football team or the Virginia Cavaliers football team. As studly as these studs are, they can’t keep up with me at 61. I eat real food and I am conditioned differently than they are. If I can do this at 61, what could you do?

Ring Rust Radio: You have made several recent in-ring appearances with WWE, including the 2015 Royal Rumble and WrestleMania 32. Would you be interested in another one-off appearance and do you feel you could pull off a singles match again if asked?

Diamond Dallas Page: I know I could, but how would I be at the end of the match? Risk and reward, it wouldn’t be worth the punishment. The reason why Vince put me in the Andre the Giant Battle Royal; There was still 12 legends that could go like myself and Tatanka. So a few days before my 60th birthday, it was a real honor to get asked to do this. You have guys like Ric Flair and Dory Funk who could do this kind of work in their 60’s and maybe a couple of other guys, but it’s a very small handful of guys that could. For me, I know I can do it, but I would feel so beat up afterwards that it wouldn’t be worth it for me. Anytime I can go out and hit a diamond cutter I’ll take it. Cody sent me a text when he found out, and he told me it was so apropos that he would be the first to take the cutter. That kid is doing great right now with ROH and New Japan. I have known him since he was seven years old. I would still do that and go out there and hit the cutter out of nowhere. People would jump all over it. I have a picture at WrestleMania where I took a picture of three levels of fans doing the diamond cutter sign in that Dallas stadium. 80% of them were standing there putting up the diamond cutter sign. It was very humbling and all so cool.

Ring Rust Radio: Excluding yourself, even though that would be a good thing, who would be on your pro wrestling Mt. Rushmore?

Diamond Dallas Page: For me personally, Ric Flair, Dusty Rhodes, Jake Roberts, and Vince McMahon. I would abso-f–king-loutley put myself on there is I could, Vince would be gone. Dusty and I would sit around and talk about Vince. We considered him the best heel/babyface in the business ever. When he is face you love him, and when he is heel you hate him. He is the worker’s worker. We used to laugh about some of the stuff he would do and I think Bischoff should go in the Hall of Fame. I would love to induct him but it would probably be Jason Hervey or someone else. I would love to induct him because I have so many good stories about him. Eric brought the best out of Vince.