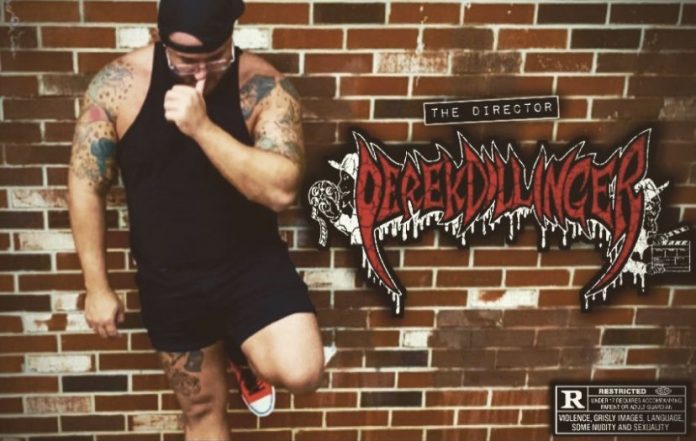 In 2014, at a small independent card in an even smaller town just outside of Cleveland, Ohio, an aspiring rookie laced up his newly-bought wrestling shoes as he prepared for his first match ever that night. As he peered through the curtain at the bouts before his scheduled debut, he felt an overwhelming anxiety, knowing that he was mere minutes away from stepping into the ring in front of a paying audience. Despite the fact that the wait for his contest was only two matches, the dread felt as though it took hours for him to hear the opening bell.

Would you believe that same panicked hopeful is now one of the loudest, crudest, and brashest grapplers on the independent circuit today?

Derek Dillinger, a 30-year-old athlete that combines a dynamic in-ring style with a flare for the dramatics, can rile up an audience like few on the independents today. With a Ford Coppola-inspired persona and athleticism that blends many throwback elements of the sport, promoters have taken notice of the grappler that dubbed himself a director in recent years, which lead to him zigzagging across the mid-west to make a name for himself. When he bounds through the curtain quite literally into the spotlight of professional wrestling, Derek hits his stage, a platform he didn’t know would become second nature to him when he stood nervously backstage before he pro debut six years ago.

But, in an example of life imitating art, his upbringing, as well as his journey into sports entertainment didn’t showcase any glitz or glamour.

From a working class family, Derek had a rather humble home life. In order to provide for the family, his father worked several hours of overtime, leaving very little time to spend with his loved ones during the week. Still, he made sure to squeeze into whatever time he could with Derek, and the two bonded over professional wrestling, watching the Monday Night wars together while channel surfing or putting clunky VHS tapes into the VCR to watch bootlegged ECW shows.

“Every week, my dad and I would spend quality time watching WWF and WCW on TV before he introduced me to ECW. Every two weeks, we would go to watch independent wrestling at Cleveland All Pro Wrestling. Once my Dad introduced me to ECW, I knew I was in love with pro wrestling,” Derek explained.

Those Cleveland All Pro events, promoted by the late JT Lightening, who is considered by many to be the godfather of the Cleveland independent scene, provided a peek into the sport that was close to home for the aspiring wrestler. Through the connection with JT, Derek planned to begin to learn the ropes, but Lightening tragically passed away from cancer before the lessons began. Instead, Derek found long-time Ohio veteran, Rickey Shane Page, who went on to international travels and is the current Game Changer Wrestling Champion, to teach him the sport. Despite getting an introduction to the over-the-top world of sports entertainment, Dillinger found that some real-life obstacles made the maneuvers difficult to learn.

“The thought process was super hard, I’m dyslexic. I have ADD, I don’t know the difference from my left and right and at the time I was in terrible shape. I’m really critical on myself but the main part of training was ears open and mouth shut,” he explained.

Rickey Shane Page, who logged hundreds of miles on the road before he landed the break that made him one of the most well-known names on the independents, appreciated Derek’s tenacity and refusal to give up despite the hurdles that the learning disorders put in front on him. As the only student at the time, Derek showed up every week and put himself through the tedious process of learning the ways of the ring safely. What he didn’t know was that the fees he paid for training just barely covered the rent of the facility so Rickey didn’t profit from his role as the trainer, dedicating his time because he saw the potential in the student.

After he debuted in his previously mentioned first match, Dillinger still wanted to consume as much knowledge as he possibly could, and with Rickey often in different states during his own travels, Derek paired up with another long-time Ohio standout, Matt Justice to teach him another diverse aspects of the sport.

“Sitting under his learning tree was a completely different style of wrestling than I learned from Rickey. Matt is full of so much knowledge and has a coach mentality and knows exactly how to push your buttons to bring you to your full potential. Matt gave me a lot of psychology stuff at the time I didn’t know I would need. When I think back everything he did made so much sense. Training with Matt was probably the toughest training I endured,” Derek remarked.

Dillinger didn’t realize quite how tough this regiment would be until he showed up one winter morning to see Justice had set up his ring inside the garage. As snow fell outside, Derek fell on the cold canvas inside, as Justice didn’t have a heating system in the makeshift training center. Derek cites his passion for sports entertainment for the reason he made the hour commute to the frigid squared circle twice a week.

After he got the basics, Dillinger looked to expand his in-ring persona, finding inspiration within his fandom and real-life hobbies to generate a unique performance when he stepped into the ring ropes.


“I have a degree in Visual Communication and Graphic Design. I also took a couple of film classes that changed my life. I am a huge fan of 80’s movies and more importantly 80’s horror movies. The more gritty and gore the video has, I love it. If you watch any of my short videos I release, they all include stuff I love. Whether it’s movie clips, rap music, or the clothes I wear,” he said.


As his career progressed the past few years and he found himself as a performer, Derek Dillinger’s skills got him noticed, both inside and outside of his hometown. He began a mainstay for Absolute Intense Wrestling, one of the longest-running and most well-known organizations in his hometown. He also made an impression on Ryse Wrestling, the Pittsburgh-based group that is considered the fastest-rising promotion in the steel city with its mixture of talented prospects and established veterans.

“I’ve been so grateful to be able to work for Absolute Intense Wrestling. John Thorne is the best. Thorne has given me so many opportunities to work with so many of the ECW Legends, as well as some of the biggest names on the current indy scene. With that being said, I think one of my favorite highlights is working with Tracy Smothers in one of his last matches.,” Derek said.

“I think everyone gets that booking is a pressure gig, but for everyone the pressure is different. I’ve know Derek since he broke in. Derek was a guy I’ve advocated for everywhere I’ve ever been. Derek is incredibly passionate about wrestling, I know few that take it as seriously and to heart as Derek does. To me, he’s a prototype of who you’d want on a card, he’s versatile, he draw attention and sells tickets,” added Marcus Mann, one of the main organizers of Ryse.

When Derek isn’t posing in the spotlight alongside The Production, one of AIW’s most prominent factions, he can be found as a member of The Grind House in Ryse with Shirley Doe, one of the most respected veterans of the Pittsburgh area. The villainous duo have been known to generate jeers from the crowd and chaos in the ring during most Ryse’s events. Considered one of the wisest minds of his generation, Doe saw the potential in Derek very early in Ryse’s existence.

“He’s not just the best wrestler in Pittsburgh, he’s the best kept secret in the indies. He’s the person I’ve seen the most of myself in, in so many ways and that’s why I’ve always sought him out for at least five years now before anyone even knew who he was,” Doe explained.

Derek finds that juggling real-life responsibilities and chasing pro wrestling stardom can be a tough balancing act. To maximize his time, he cites a recent switch from work as a radiology tech to the insurance industry as a move that gives him more flexibility to travel as new wrestling opportunities arrive. Despite the change, he believes he made the right move, as it’s further dedication to his ultimate goal as a professional wrestler, making it big with a full-time contract with a national organization. Where Derek Dillinger lands next remains to be seen, but his story speaks volumes to personal growth and pride in accomplishments, as he achieved his goal of being a professional wrestling, a status he thought was unobtainable when he first saw the larger-than-life figures beamed through his television screen.